And a freshwater crocodile saves the day..

As a few of you saw, we headed to the Kilcoy Show yesterday. Jaiden had decided on the way that he was old enough to drive the dodgem cars all by himself so he spent the drive there getting all excited on how he was going to smash into me and crash me into the walls. We got there and instantly spotted the dodgems so he was a pretty happy camper indeed. After paying the entry fee I soon realised I needed more cash, one would think that being a racecourse, there’d be an ATM somewhere, apparently not! We decided to have a walk around and see what the show had to offer.

Instantly J noticed that the dodgems were totally empty and there were only a few other boring (in his words) rides, he started to get a bit upset and started informing me they need to turn the cars on or this is the worst show ever…. We went for a walk and checked out some animals and the Lego competition, Jaiden has always wanted to enter one of these Lego competitions so then I was in the bad books for not telling him that he could enter. We were off to a good start…

We decided to take a trip into town to get some money and considering he was now pretty upset I thought we’d lash out and have lunch at a local cafe. Jaidens toasted sandwich arrived soggy and instantly fell apart, his side of chips were terribly undercooked and the smoothie we ordered was about as tasty as a leather boot. Sigh, not the best way to spend $30. Jaiden declared the cafe “totally terrible” so we left, got some cash and headed back to the show, with me hoping that by now the dodgem cars were open..

We got back to the show and there was some action at the dodgem cars, action in the form of an electrician and lots of men standing around scratching their heads. I explained that clearly the ride was broken so maybe we were just going to give the dodgems a miss this time.

By now Jaiden was a pretty upset and dejected young man with the odd tear streaming down his face. Despite all of Jaidens progress, he is still a very emotional young man which is pretty common for kids on the Autism Spectrum. We walked around for a bit and Jaiden spotted a few people standing around so we went and had a look at what the fuss was about. There were a few people patting a baby crocodile and I asked Jaiden if he wanted to have a pat to which he promptly declined. I reminded him that very often he doesn’t think he wants to do something, but once he does, he loves it. We stood back and observed for a few minutes before he decided he wanted to give it a pat. I told him I’d take a bit of a picture if he wanted, he agreed so we walked up for a closer look. 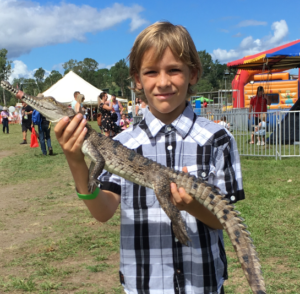 Next thing, Jaiden is being handed a baby fresh water crocodile to hold! He’d just gone from not wanting to pat it, to holding it by himself! Afterwards he told me how soft it was underneath and that “It was actually pretty cool”. We stuck around for a bit longer to catch the next show that showcased a bunch of Australian snakes, lizards and a goanna. We had a bit of a chat to the man presenting the show afterwards and Jaiden left the show talking non-stop about the different snakes and how cool it was that he got to hold a crocodile all by himself, even if he was a bit scared..

So what very nearly turned into a failure of a day out, turned into a very special one indeed, all thanks to DREAMTIME REPTILES​ and a baby fresh water crocodile… These guys really do put on an awesome show, so if you’re ever after something different for your reptile loving kids, check them out!