Loud music, bright lights, 100+ strangers, a new environment and trying something for the first time…That’s pretty much a recipe for disaster for many kids on (and off!) the spectrum. But, not today my friends, not today!

Amongst other weekly homeschool events in the area, there is one held at the local rollerskating rink and after initially declining to give it a go Jaiden decided he was down to see what it was all about, so today we went and checked it out! After spending 30mins on YouTube watching “how to Rollerblade” tutorials and a 20min discussion around having realistic expectations as to his abilities, we were on our way!

Other than asking me “Dad, why do people want loud music and all these lights to skate, it’s really confusing for my brain”, he was reasonably un-phased by it all and was straight into a set of rollerblades and ready to give it a go. Jaiden HATES getting things wrong and I knew there was a big chance that it was going to go pair shaped, thus the prior discussion around realistic expectations and needing to get up and try again, or as J calls it “My eye of the Tiger”. The second he got up off the chair, he went back down again.. Not phased he grabbed my hand and he slowly got his balance standing up. After a few minutes of going over the instructions in the lessons he watched earlier he was slowly rolling holding my hand on the carpet.

We hit the rink, surrpunded by 50+ kids, bright lights and loud (to him) music and instantly he forgot it all, “Keep your heels together Jaiden, point your toes outwards and slowly walk” must have come out of my mouth 50 times in the first 10minutes. One of the staff members came by to offer some help “You need to keep your toes pointing outwards, just take really small steps” she says.. If his eyes could talk to me, they would have said “Dad. Shut the hell up, I know what you’re going to say. Just. Shut. Up…”

Not long after they were ready to do “speed skating” and everyone was ordered off the rink for this and the kids lined up ready. Jaiden was on the far side of the rink and suddenly found himself (and me holding him) the only person on the rink with a line of kids waiting for him to get off so they could speed skate. “Dad, we need to hurry up!” he insisted, I replied “Mate, we paid out entry fee, you’re learning, they can just wait, relax and concentrate..”

We made it off the rink and he had a quick rest before asking me to again help him along by holding his hand, this time back on the carpet. He takes a step and says “wait, I think I can balance and do it” and takes his first step unassisted before ending up flat on his backside. Undeterred he got straight back up and took a few 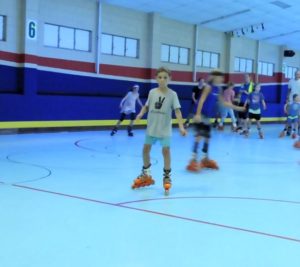 more steps before falling, each time taking more and more steps. Shortly after he came to me and says “I want to go back out on the skating part”. He shuffled back out there and took his first little step on the rink, and then his second, and then his third. I asked if he was ok to keep trying by himself, “Uh, just don’t go too far in case I crash” was the direction, deal!

It took him about 10 minutes to do a lap of the rink, about 5 minutes to do his second and whilst his back was turned I snuck off to grab a drink only to return and find him already completing another lap. Rather impressed with himself I got the “thumbs up” and a smile, winning! I sat down and started chatting (as I do!) and he kept lapping. I then noticed him falling more and more, unsure what was going on I approached him and he looked totally dejected. “I am TERRIBLE at this, I cannot go fast the skates just keep slipping and I keep falling over, this was NOT a good idea” he exclaims with tears running down his face. “Oh well, we had a good run” was pretty much what was going through my head at that stage.. Nonetheless I sat him down and again talked about realistic expectations, not giving up just because something is hard and how much fun he was having before he tried to keep up with the other kids.

“Fine, I will have one more go” he says as he tries to stomp off in a huff, nearly falling on his backside in the process, “Keep a straight face Cam, keep a straight face”. He got back out there alongside a family we met at the park a couple of weeks ago and followed them before doing yet another few laps fairly successfully.

We jumped in the car afterwards and he says “That was SO fun, it was pretty hard and kinda scary and I did hurt myself lots, but even though I failed lots I kept going and going and didn’t give up.” Before going on to tell me how them playing “Eye of the Tiger” and some song from the Karate Kid movie reminded him to keep trying.

It hit me at that point that not only was he pushing his own boundaries, facing his fears and persevering until he succeeded, he was inspiring me to do the same myself. Even as an adult, I (like many others) still find it bloody hard to step out of my comfort zone and face the prospect of failure, especially with an “audience”. But it’s days like today that remind me why it’s so important to do just that.