Throw back… Sunday! Throwing back to 3 years ago when I won the Autism Queensland Creative Futures Recognition Parent/Carer of the year award.

As well as being a big surprise, this was such a huge confidence boost for me. Stepping outside of what society deems as normal or acceptable is never easy, more so when it involves the development of a child with additional needs. When we 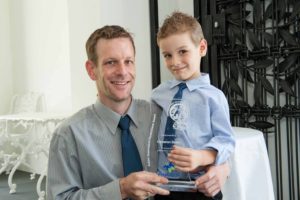 first took off travelling 5 years ago I really had no idea how much of a positive affect it would have on Jaidens development. I was taking away everything he’d ever known and putting him into an environment that I wasn’t entirely sure he’d cope with, let alone thrive in. Many people told me that he’d never cope with the constant change of environments, lack of rigid routine, the constant influx of new people or the large amounts sensory stimulation he’d be exposed to on a daily basis. Whilst there were days it was hard, for the most part he thrived and very soon he’d become a totally different child as his confidence began to grow. I very quickly realised that it was the best decision I could make.

Spending the morning talking to Governor of Queensland Paul de Jersey,Autism QLD staff as well as other peers from within the Autism community and getting such positive feedback both on our decision to travel and our subsequent decision to 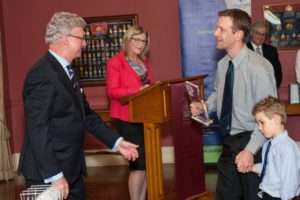 homeschool was a huge confidence boost for me back then. At that point I was just starting to let go of the need to strictly adhere to a curriculum and instead began following Jaiden’s lead and using his interests to facilitate his education based around the areas that required the most development. Much of the feedback I’d been given by professionals and peers previously was far from positive, so having our decisions not only accepted, but embraced was a real highlight for me.

3 years on and we’re now on round 2 of our travels, Jaiden and I have both settled into the child lead “unschooling” life. I no longer have to tell him what to learn and we no longer fight about ‘lesson time’. Instead I just follow his lead and take every opportunity to further explore his interests in order to provide a developmentally appropriate education, rather than a predetermined age appropriate one.

I must say a big thanks to the team at Autism QLD and Paul De Jersey for giving me the confidence to continue on down this path, both Jaiden and myself are far better off and happier for it!

I never would have imagined that our lives would change as drastically as they have. Ignore the naysayers, make those scary decisions and do the things your heart and head want to do regardless of how insane it seems. As scary as it can be, all progress starts right at the end of your comfort zone.