Socialisation and home educating is always an interesting topic to discuss. However, when a child on the spectrum is involved, there are often extra challenges to face.

When our travels started in 2012, we were in Byron bay and a car drove past with a caravan attached. A man looked out the window at Jaiden, due to his ‘aging face’ he had quite pronounced frown lines causing Jaiden to stop what he was doing and come running into the annexe screaming and crying, “he angry face me!”. Merely being looked at by a stranger was often enough for Jaiden to become upset and distressed.

Fast forward a couple of years to late 2014, he’d gotten to a point where by understood that whilst strangers often made him feel uncomfortable, as long as dad was around, he knew they would cause him absolutely no harm whatsoever. Even so, engaging with people and getting a word out of him was still a bit of a rarity, even for the likes of the local Post Office owners who we would see 2 to 3 times a week, so certainly not a new environment. A local shop owner asked me “Does he talk?”, because other than a nod and a sheepish smile, she’d get very little from him. 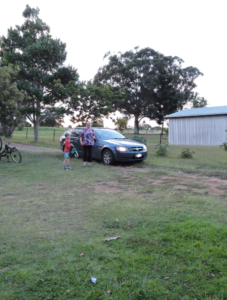 Fast forward another couple of years to yesterday afternoon. I said to Jaiden “There is someone coming to pick up the hose reel this afternoon, would you like to take it out to her when she arrives?” to which he replied “Is she a nice lady?”, I said “I have no idea mate, I have never met her!”, he looked at me and smiled and said “Yeahhh, I will take it out to her, but will you come outside too?” I agreed and he spent the next 20mins watching every car that passed to see if it was her pulling in the driveway.

So about 5:30pm a car drove into the driveway “She’s here, she’s here!” he yells, he grabs the hose reel and walks up the driveway towards the car, looking back to make sure I was following him. He walked straight up to her and handed over the hose reel without hesitation. And other that her wondering why on earth some guy was taking photos of her making a $2 purchase, she thanked him for it as he handed it over and he quickly ran off and went back to what he was doing. After I explained the reasoning for the photo, he came back, said goodbye to her and went on his merry way. As she reversed up the driveway, he turns to me and goes “That was actually pretty easy!”

If nothing else, the past couple of years has concreted my beliefs that learning social skills is not just confined to the school yard, quite the contrary. The amount of people who have known Jaiden for a number of years and have commented what a confident boy he’s become is a testament to that.

Socialisation, by definition is the activity of mixing with others, and the process of learning to behave in a way that is acceptable to society.

I’m damn proud to say that Jaiden is now doing exactly that.