Back on the road again!

Well, our 2 week shakedown is done!

I can’t believe that it was just 2 weeks ago I was working my backside off all night to get the van ready for this trial run. The 4 months leading up to this were a nightmare, yet after 2 weeks spent with my boy, meeting new people and just 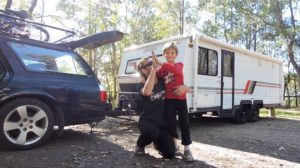 enjoying the simple things every day it seems like a distant memory. So happy, so relaxed, just perfect! We’re now parked up at mums for a few weeks so I can save some money to do some upgrades to the car as well as buying the last few bits and pieces to finish off the solar install. There are a few things we need to change / fix, but all in all it was a VERY successful trial run! The to-do list will come over the next few days.

After just 2 weeks, I can already tell this is going to be a totally different adventure to our last travels. 2 weeks into our first travels Jaiden was just starting to get comfortable in the van, exploring his surroundings, he would still grab me by the arm and try to yank me away from conversations with people, he refused to walk into the toilets because of the noise they make when they flushed, he hated kids touching his stuff or even coming near him or the annexe. 5 years on, he was straight off on his bike to explore the surroundings, he’s walking up to me and asking “Dad, can you come back to the caravan now and stop talking?” instead of pulling on my arm, he’s walking around the campground like he owns the place making friends with any kid who appears, inviting them to play lego or to have a ride of his bike. He’s come so far, it really blows my mind! What happened to my boy?!

When we set off traveling 5 years ago I did so on nothing more than a gut feeling. A gut feeling that what I was doing for Jaiden was not helping him expand his horizons, it wasn’t helping him overcome his need for military type routines or 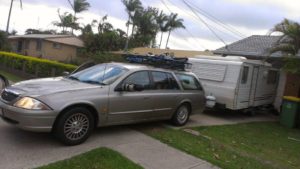 how to cope with sensory overstimulation, it wasn’t teaching him how to interact with people properly or to regulate his emotions when he became angry or frustrated. Ultimately I thought I was doing the right thing by going to work every day, dropping him off at kindy at 6:30am and picking him up at 5:30pm every day. By the weekend I was so mentally and physically exhausted that even finding a couple of hours to play with had become a chore.

One day my counsellor said to me “If you could wake up tomorrow and do ANYTHING, what would you do?”, I replied “I dunno, take my boy to the beach, or for a skate or something, I guess”. She said, “what about the day after that?” to which I laughed it off and said “I dunno, the same thing, I guess!” she looked at me and said “Well that’s what you should be doing then”. At the time I laughed it off like she was a lunatic, but she was right, there was a HUGE disconnect between what I was doing and what it was I really wanted to be, which was a good dad.

People often say to me “Oh you’re so lucky! I wish I could do that!”. Well, here’s the thing, none of it was luck or wishing. I quit a good job, I parted out a car I loved, sold everything I had worked for and spent 6 months learning about caravans and solar power. Ultimately I made the decision to live a simpler life on less than $500 a week and get some of the tax dollars back that I’d paid over the past 15 years whilst giving us both the chance at a happier life. This time around, we’re living on even less money as nearly 1/3 of our income is going on loan repayments for the caravan. It’s not luck, it’s all hard work, sacrifice and commitment. 1st time around, we drove away for less than $15k. Car, 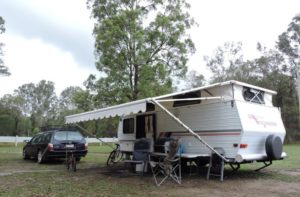 caravan, upgrades, solar, everything. This time it will be closer to $20k once everything is done to the car and van, but unlike last time this time is not a “See how we go” scenario, Jaiden and I both want to travel long term so doing so with a little bit more space is worth the extra $5k.

I had someone ask me “Don’t you feel a bit guilty traveling on the Government benefits? Most of us have to work our whole lives to do this”. Well, no, I don’t have any guilt. In fact us traveling actually saves the Government money as I am no longer claiming rent assistance. When I made the decision to do this initially, I also made the decision to do so knowing I would not be putting any superannuation away for my retirement, I did so knowing that I was going to be spending 24/7/365 with my boy with absolutely no time off, support or respite. So no, I don’t feel guilt, I feel proud that I made the sacrifices I did to give us both a happier and healthier life.

How do we do it? Well, there is a large difference between living on the road and holidaying on the road. We’re living on the road; so that includes eating cheaply, mainly choosing free (or cheap) attractions, camping only where it is cheap or free, traveling slowly and saving petrol money for larger trips. Even in our cheap rural property, we were paying $420 a fortnight rent, for the last fortnight we paid $176 which even then, is on the upper end of what we want to be paying. A caravan park would have been close to $500 for the fortnight, not achievable for us. Once you remove rent and electricity, suddenly there’s a huge chunk of money you don’t need to find every week; this is why many people like me choose to live this more simple life on the road, it’s cheaper and more sustainable!

I’d certainly prefer to be broke on the road whilst having amazing experiences with Jaiden than I would be being broke, stuck at home!