Pictured here are 2 boys, 3 years apart in age and who share very few interests in common. They do however have some things in common, they don’t go to school and they both prefer to play in smaller groups rather than large groups.

For homeschoolers, when the need for socialisation is brought up, it generally conjures up this idea of children being put into the playground in order to learn how to interact with children their own age. The problem is, the school yard is often not a very sociable place. For many children it results in feelings of isolation, being bullied or feeling like they need to act or behave a certain way in order to be accepted. I’m not entirely convinced any of this results in our children growing up being sociable, in fact I’d argue that in some cases, the exact opposite occurs. 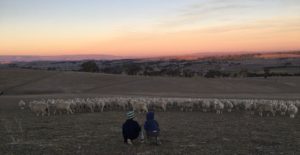 As a child who has previously struggled with social interaction, I want to teach Jaiden that he has the ability to pick and choose his friends, when he does and does not want to socialize and more importantly, that there’s absolutely no reason to change the way he acts in order to gain social acceptance. I want to teach him it’s ok to play with anybody, regardless of their age, gender, skin colour or any other difference that may cause segregation either in childhood or adulthood. I want to teach him to be true to himself, as well as accepting others for who they are, regardless of their differences. I believe that if I teach him all of the above, he’ll be far more likely to grow up into an adult that has strong social boundaries, as well as one who surrounds himself with people who treat him with the love and respect he deserves, that we all deserve.

When Jaiden and Ayden met 3 days ago, less than a minute later they were off playing together and have been joined at the hip ever since. They are not children being socialised on a daily basis, they are children that have the ability to pick and choose who they socialise with. They are children who are learning to develop friendships with a diverse group of people and learning the basics of socialisation, like conflict resolution. Most importantly, they are doing this whilst by being true to themselves, accepting each other’s differences and respecting one another’s opinion.

These are the things friendships require to flourish, be they adult or childhood friendships. These 2 boys are learning it without exposure to socialisation in the schoolyard, or being forced to interact with others.

I think more emphasis needs to be placed on the skills that children need in order to develop positive social interactions and less on antiquated beliefs that everybody needs to be exposed to the same, large group of children 35 hours a week, 40 weeks a year in order to learn how to develop these skills.

If we focus more on developing these skills and less on the way they are developed, I think we’ll end up raising far more sociable adults, as opposed to adults who were merely socialised.