Can kids teach themselves to read?

4 years ago, not only could this boy not read, he hated trying…

4 years ago I was pushing Jaiden to learn to read. I knew that if I got him reading his speech would improve, and his vocabulary would explode. His speech therapist at the time agreed so we began to focus on getting him to read. The problem was, the more I tried to teach him to read, the less he enjoyed it. Because of his often “black and white” perception of the world and the complexity of the rules (and consistency) in the English language he struggled once we moved on from basic sight words. We very quickly found ourselves tearing shreds off each other by 10am, neither of us were enjoying the process.

I got to a point where I’d had enough. The reason I decided to home educate Jaiden was so he could learn at his pace, in a way that made learning fun and in an environment that he was comfortable in, yet due to the expectations that all kids should be reading at 6, I was doing the exact opposite. So I did the only logical thing, I gave up actively trying.

I’d met people who unschooled their children and a couple had told me that their kids taught themselves to read. Gotta be honest here, I thought it was total horse shit, I didn’t buy it for a second. Instead of sitting down with Jaiden every day trying to get him to read, I bought him a bunch of books that were of interest to him. Not the big red house, or the blue dog, books on Lego, HotWheels, Star Wars, things he loved. Most of the books were well above his reading level, but he very quickly started sitting down flicking through them, how much he understood I’ll never know, but his head was in a book which was a win in itself.

Not long after Jaiden got given a book from a friend on Minecraft. I’d previously been hesitant to introduce this because he already had major emotion regulation issues when it came to technology, but that’s another story altogether. I did however agree that if he sat down and learned the basics I would get him a trial and see how he went playing by himself. He was coming to me constantly asking me “What is this word, what is that word, what does that mean?”, so whilst I was not sure how much he was comprehending, the fact remained he was interested.

One night, 6 months after I “Gave up” teaching him to read, he came to me and asked to read a book before bed. He went to the toilet and I looked through the book, it was a book called “Building a House” which was FILLED with vowel blends. My heart sunk, knowing that this was potentially going to end in tears as this was not an easy book to read phonetically and instead required significant knowledge of different blends, the one thing that he struggled with which lead to me ‘giving up’. 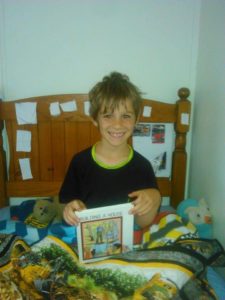 Much to my amazement, he read the entire book from start to finish whilst I sat there in disbelief with tears running down my face. As he finished the book, I grabbed him by the shoulders and started shaking him excitedly, “You’re reading! Oh my gosh, you’re reading!”. From that point on, there was no stopping him. He’d read street signs, toy boxes, car magazines, labels on his clothes, absolutely anything he saw.

This was the point where I had to accept that no matter what my (or societies) expectations were around education, all children learn at a different rate. Forcing him to read may have got him reading sooner which would be great, but it was not developing his love of reading, I now know the latter is more important. This was the game-changer for me; it was where I started to trust that I could use his natural curiosity to provide him a developmentally appropriate education, instead of having a set curriculum which was based only on age, not developmental level. It was the point where I stopped trying to teach and started trying to facilitate, the goal being not to mimic school, but rather to foster his love of learning, to create a lifelong learner. Fostering a love of reading means he will possess the skills to learn and master any skills or trade he pleases. 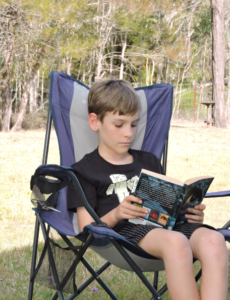 Walking outside and seeing his head buried in his first 500+ page novel fills me with so much joy. I never thought that by letting go of my expectations, or the need to dictate his education, that he would naturally develop a love of reading, a love of learning. It’s been a tough and ongoing process for me to let go of those expectations totally, and perhaps I never will. But as time marches on, Jaiden continues to teach me that I don’t need to worry about him being at the same level as everybody else his age. Rather, I just need to foster his love of learning by answering his questions and using his interests as a launch-pad to introduce new concepts and ideas. There are areas where he is well above his age group and areas where he is behind. But that’s ok, we’re all individuals with different skills and talents. My aim is to continue to foster those skills and talents so he can one day turns them into a career he loves and is passionate about.

Learning can be done anywhere, at any age, and is not confined to the classroom or university, nor does it have to be done in workbooks or in a structured manner. Rather, every experience we have in life is an opportunity to learn something new. Whether we choose to take those lessons is up to us. I have learned a lot over the past 5 years, more than I ever expected to. To be doing that right alongside Jaiden is pretty special indeed.