Car repairs, with a view!

Now this is a view I could get used too! Well, excluding the whole car repair caper..

We were unable to get into the Bathurst Showgrounds due to the upcoming show. after a quick search we stumbled across Barcoos Farmstays Bathurst​. Located just 10k out of Bathurst and set on a lovely property overlooking the mountains it sure is a lovely spot to be, even if we’re spending the day working on the car! With a heap of activities on offer as well as horses, donkeys, sheep, pigs, chooks, ducks and some very friendly dogs Jaiden is loving it, we even got to watch the sheep having a haircut yesterday! With rates comparable to most caravan parks it’s certainly a stop to add to your “to do” list regardless of whether you’re a full time traveller or just after a relaxing weekend away!

Now, onto the car.. Whilst in Brisbane we copped some damage to the exhaust. I went and saw the crew at Hi-Tech Mufflers​ who suggested Bathurst Mufflers​ may be able to squeeze us in to check it out further. After a quick look on the hoist I was 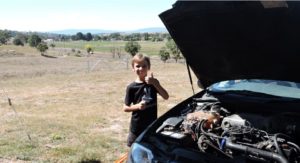 super happy when he disagreed with me and said it was just a blown out gasket causing all the noise, so I went home with new gaskets in hand and got to work! A couple of hours later it was all back together, I excitedly fired up the car and… it was still leaking! Arg! After some further digging it appears that whatever hit the extractors on the highway has bent them badly, so much so that the flange is not sealing against the engine, thus creating a massive exhaust leak and causing the car sound less like a V8 and more like a tractor!

A mate in Canberra has some extractors for sale that will suit the car (as they are $800-$1000 new!) so we’re going on a road trip to pick them up and hopefully get them fitted by the end of the week as there will need to be some cutting / welding of the exhaust to make them fit.

After the fabulous time we had at the 6hr, we had a heap of things planned before we left Bathurst which Jaiden was super excited for, needless to say he’s a little disappointed that we’ve had to postpone and instead are wrenching on the car. But as he does, he’s taken it all in his stride and has been both a great help as my #1 tool passer and also constantly assuring me that it’s all going to be ok and that we’ll work it out, because that’s just what we do!

It feels like such a rollercoaster ride at times, but it wouldn’t be an adventure if everything went to plan!