What’s the only thing worse than being on 400+ acres and having some random person camp RIGHT next to you?! Well, if that random person is your ex! Egh!

Ok, so maybe I invited her to camp next to us, but why would I invite my ex up here? Well, when people separate things are often messy, feelings are hurt and things are said and done that cannot be undone, which was certainly the case for us. It’s easy to hold onto that emotional trauma and do everything possible to remove them from your life or get back at them; as if revenge is somehow going to make you feel better or being “right” will make a difference. 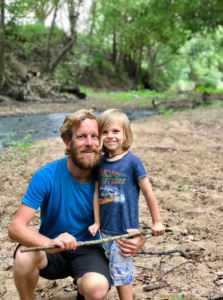 The thing is there’s often only 1 loser in this situation and that’s the kids involved; which is tragic as they are the ones who often have no say in the decision whatsoever and have their lives turned upside down. On top of this they are often stuck in the middle of silly mind games, fights for dominance, finances or custody. When Carly and I split, like many other separations, it was pretty messy and it took us both some time to recover from what we’d put each other through. For us though, we had the added level of complexity of us conceiving 6 months + after we’d already separated and called it quits. Link to that story is Here

On top of having a child (Kaleb) together, we also both had our own children. For Jaiden, Carly had been somewhat of a mother figure for him for the past 4 odd years. Conversely, I’d been a father figure for her daughter, Elizabeth. It would have been easy for us to pass Kaleb back and forth so Carly and I didn’t have to spend time with each other. But instead, we continued to catch up and spend time together, for the sheer fact that the family unit we’d created, albeit pretty unconventional, was the only family unit our kids had known.

I think that too often people hang onto the hurt of the past and carry it into the future, sometimes holding onto it forever and never moving on. The problem is that not only does it prevent you from living a happy and fulfilling life, it negatively affects the children who are often used as collateral in messy disputes and mind games. So rather than using the kids as pawns Carly and I do what we can to be positive role models as parents, that includes spending time together and ensuring our differences or disagreements don’t boil over and affect the kids. 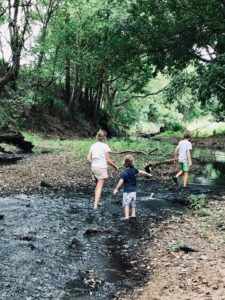 It’s not always smooth sailing co parenting and yes, we certainly have our disagreements. But modeling positive parenting relationships is far more likely to result in our kids all growing up feeling as if they were loved, rather than feeling like they were in the middle of a relationship shit storm. This will not only help them in the short term but I think it’ll make them more likely to grow up and turn into positive and engaged parents themselves.

Spending time together as we do, not only allows me to spend more time with Kaleb, but it allows our other kids time with their respective “step parent”. Jaiden loved having his little brother and Elizabeth around and Elizabeth loved learning to whittle a spear, chop wood with an axe and enjoy the simple things in life. On top of that, it meant that Carly and I got to enjoy some quality time with the kids we have both spent many years, and lots of hard work raising.

So to those families who are separated, I ask that you do just one thing. Consider how you can best set a positive example as parents that will result in your kids growing up in a loving, caring and nurturing environment with positive role models as parents.Even if it’s not the white picket fence, happily ever after ending you’d envisioned. 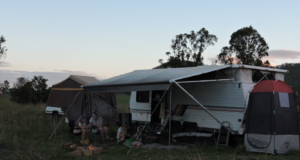