Desensitization and Autism… Our Journey with the Ocean

We have lots of good days, but today, today was an unforgettable one!

For those who have been long time followers, you’ll know that getting Jaiden in the water has been a long process. When it came to the beach, it was an even harder task. The sensory stimulation of the sand, the noise of the waves and the sheer size

Jaiden starting to walk on the Beach – Feb 2013

of the ocean meant that Jaiden, well, hated the beach. So much so that on the start of our first travels 5 years ago gettinghim to even leave the car at a surf beach was a task in itself. I spent 4 weeks with him right on the ocean at Illaroo Camping Area in 2014 in an attempt to desensitize him to the sound of the ocean which made a huge difference but he was still far from comfortable and didn’t want to be in any more than a couple of cm of water.

Despite more than a few people disagreeing with my approach, I’ve always pushed Jaiden to step outside of his comfort zone and encouraged him to try and do the same. Often I would push too far and he’d go backwards, but over the years I’ve found a “sweet spot” whereby I can both respect his boundaries and still push him to step outside of his comfort zone. If I had not spent the past 5 years doing so, he would not have progressed even remotely as far as he has; I think allowing kids (ASD or not) to stay inside their comfort zone 100% of the time can be just as damaging as not respecting their boundaries at all. Life is unpredictable, it can be scary, it’s full of risk, full of rewards and often failure. I think that as adults, we’re often too scared to face the unknown or try something new, so we stay within our comfort zone never stepping out or trying the things we really want to. This is why I have the approach I do, I want Jaiden to know that it’s ok to take risks, sometimes you fail, sometimes you succeed, but trying is the most important thing. Or as one of my favourite sayings goes – “Your comfort zone is a beautiful place, but nothing ever grows there”.

Anyway, over the past couple of months we’ve had a handful of successful beach trips. Each time Jaiden has become more confident and with some pushing has ventured out further and further. Last week we made it into waist deep water and he had a ball, we got back in the car and he says to me “I’m not very scared of the beach any more, well, sometimes it’s scary, but it’s also pretty fun”. Win! After watching some other young kids on bodyboards, Jaiden decided he was keen to give it a go, so we did!

After a 45min discussion about what to do when the inevitable wipe out happened and a pep talk on balancing on the board, we were on our way! As soon as we were in the water Jaiden said “I don’t think I want to, I want to go back in.” I assured him that he’d be ok and that because we were only in ankle deep water, he could easily stand up if he needed to. Given that he was laying down on the board the waves looked huge, so I had him stand up so he could see they were in fact pretty small.

A small wave came and I pushed him onto it and away he went, as he reached the shallows he turned around and was full of 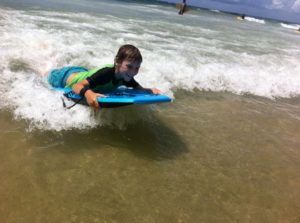 smiles, fist pumping the air and yelling “Yewwwwwww, I did it! Did you see me?!”. Smiling from ear to ear, perhaps even shedding a liiiitle tear I ran to him and gave him a big High 5 and a hug. As we walked back out he stopped dead “Ouch, ouch, my ankle!” I knew straight away he’d been stung by a blue bottle, dammit! Trying not to make a huge deal of it, I put some ice cold water we had in our bag on it and went on to discuss what they were and what had happened. Thankfully it was only 5cm long, so the pain subsided pretty quickly.

After he settled down I asked if he was ready to go and get some more waves, he replied “No way, there’s blue bottles, I am not going in there!”, I instantly replied “But that’s like not going to the park because there’s ants there, or because there’s a bee buzzing around”. He looked at me and processed it for a bit and replied “Mmmm, ok, let’s go and try again”, whilst giving myself a virtual pat on the back for the justification, we headed back out.

I pushed him onto another wave and off he went, smiling from ear to ear and fist pumping the air again. A dozen or so waves later I told him he could try and stand up and push himself onto a wave. Well, that was it, there was no stopping him! He spent the next 2 hours catching waves and sprinting back into the water to get another one. He had started off asking me which waves to catch and by the end he was reading the incoming waves and choosing the best ones to catch, quite well I might add!

Eventually Dad-mode kicked in and I told him we had to go as it was midday and we’d been in the sun for 3 hours. We 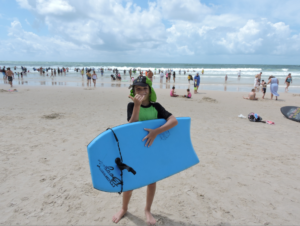 stopped and looked at the waves and I pointed out to him the Rips along the beach. He’s now spent the last hour on YouTube learning about Blue Bottle first-aid and how Rips work, how to spot them and how to escape them safely.

I have spent quite literally hundreds of hours desensitizing him to the ocean and today is the day it’s all paid off! I spent many years surfing and being able to now enjoy the ocean with J really does mean so much to me. So very proud of him and he’s super proud if himself, rightly so! We had a great talk about how he was scared and he overcame that fear and now is very keen to get back to the beach again.

The plan was to try and save some money whilst here house sitting.. Well, that just went out the window. I’m off to Gumtree to find him a surfboard…