Explaining suicide to a child…

Out of all the topics I’ve taught Jaiden about, this one was the hardest. A real life lesson on mental health, depression and suicide.
When we were living in Blackbutt about 3 years ago, I met a guy named Terry who had came to pick up some stuff we were giving away, at the time he asked about some of our furniture that he wanted to buy but could not pay for up front. He seemed like an honest guy so we came to an agreement that he would pay off the stuff he wanted, as he was due to move house and had no furniture. At the time he offered me some help packing up, cleaning and doing some garden work. At the time I thought it was somewhat of a token gesture. He then proceeded to spend the next 3 weekends and several days after work helping me around the place instead of relaxing, despite him working a very physically demanding job at the time. Anything I asked of him, he was happy to do and even offered to store my car at his placed until it sold, which was an offer I took him up on. He spent hours cutting firewood on the property he was renting so I didn’t have to buy it and helped me do trips to the dump unloading load after load of stuff that I didn’t have room to store. The thing I appreciated most, was the time we’d spend just sitting and chatting after a day of hard work, something I was eternally grateful for as I went through the arduous process of culling all my possessions in 6 weeks.

Last week he posted a Goodbye message on his facebook page, something that was very out of character for him considering he’s not typically the attention seeking type. Despite having gone through some really tough times recently, I’d chatted to him days before and he seemed to be doing better. I’d planned to catch up with him when I was in the area, he even offered to do some welding that I needed done, yet as often happens in todays world, other things came up and I never made the time to go and see him, something that will no doubt play on my mind for some time.

Despite the help that is available to people with depressions or other mental health issues, there’s still a lot of stigma that surrounds admitting you are not ok, this is something that needs to change. There have been times in my life where I have struggled for various reasons and despite having a few close friends and thousands of you following our journey, I found it too hard to talk about and instead just acted like everything was ok despite this being far from the truth. Whether it’s the fear of showing weakness or worrying that people will simply not understand, it’s something that needs to change. Whilst discussing the topic with a 10 year old might not be something everybody is comfortable with, I think it’s something we should be doing with all children.

I have spent a lot of time over the years becoming more aware of my emotions and embarking on a personal development journey to master my own psychology as well working to better understand my emotions and mental state, something that has made a huge difference in my life. I have always talked openly with Jaiden about my emotions as it’s very easy in tough times to project your struggles onto anybody around you, including children. Because it is just Jaiden and I it’s always been very important to me to allow Jaiden to express his emotions openly, without fear of judgement or ridicule. Sure, sometimes him having a major meltdown because his mouse batteries went flat may not be the largest struggle he’ll ever have, if he’s feeling those emotions I want him to be able to express them, not to bottle them up. I want Jaiden to always talk openly about how he feels and how other peoples actions make him feel, I think we’re too often told as kids to “suck it up” which ultimately just leads to adults not feeling like they can openly share their emotions without judgement.

Sitting down and having the discussion with Jaiden was not an easy one. He cried, I cried. Jaiden remembers Terry well and kept asking me “But why didn’t he tell someone if he was sad? Maybe they could help him?”, a question I wish I could answer for him. Sadly, I didn’t have any. Instead all I could do was hug him and tell him that above anything else in the world I want him to do, being able to talk to others about how he was feeling was the most important. 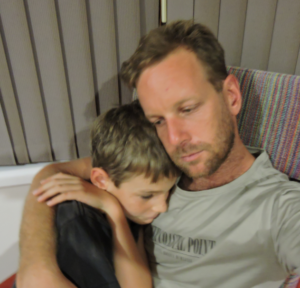 After a week in a coma in ICU, Terry’s life support was turned off and the life of a lovely, caring man was over, far too early.

RIP Terry. Thanks for the good times brother.