Yesterday we went to the Glowworm tunnel with a lady we met called Kasia who comes from Poland. We had to drive very slowly because the dirt road was very bumpy. When we got there we had to walk through a tunnel and go on a 1km bush walk. When we went inside the tunnel it was very dark and scary, it was also wet and cold. When my dad turned the light off the Glowworms were glowing all around us. 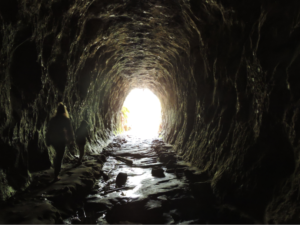 They were really cool and they were a greeny blue color. It kind of looked like there were stars in the tunnel. The tunnel was made in 1906 so trains could go through the mountain and carry oil.

Glowworms glow because of bioluminescence. This happens when their body waste and oxygen mix. The Glowworms hang down a sticky rope that hangs from the roof to catch food. The light from the worm attracts insects, when a mosquito gets stuck in the sticky rope they can’t get out so they get eaten.

It was a bit sad because some people be really lazy and just plonked their rubbish in the middle of the bush.

I had lots of fun but the slow bumpy ride was a bit boring so when we were heading back I had a little nap.