Today is always a day full of reminiscing. It’s my Birthday, but also the anniversary of the day I took the leap of faith to travel.

My entire life was once predicated around working, making enough money to survive, and spending whatever was left over on my car. Sure, spending tens of thousands of dollars on a car doesn’t sound like the smartest move, but the car scene had been the basis of my social life since I was 18. I didn’t often go out to party and instead would meet with likeminded people and share our passion of cars. 8 years ago however, I decided to sell a freshly built engine, the engine of my dreams, one I had just spent over $10 000 building. 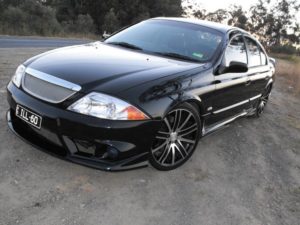 When I first got it, I was so excited, I would sit in the shed looking at the new engine, planning out future plans for the car and dreaming of it one day being ‘perfect’. The thing is, perfect never exists. It doesn’t matter if it’s a car or a house, we always want more and are seldom content with what we have. It’s like a game where the goalposts are forever moving, just when you think you’ve won, the goal posts move again and you’re back chasing the next thing.

As I started to question what was truly important to me, I found myself in a position where I didn’t care about the engine, nor the car anymore, so I put the lot up for sale. Plenty of my friends thought I’d lost the plot, because it was my pride and joy. On my Birthday, 8 years ago, I sold the engine of my dreams. I was not sad to see it go, I was excited as to what the next chapter would have in store for Jaiden and I. I spent the next 3 months stripping the car back to a bare shell, selling every single part until I was eventually left with a bare shell that was dragged onto a tilt tray where it would make its last trip, to the crusher. I’d underestimated the effect this would have on me, for years I continued to dream about the car. I had a re-occurring dream where I ‘found’ the car in all its glory, only to awaken to the realisation that it was long gone.

As we set off on our travels, I quickly realised that there was so much more to life than my car, or possessions in general. Many of my friends in the car scene disappeared over time, but they were replaced with people who shared similar values to those I was developing, the art of living simply and being grateful for the little we had. There were parts of my old life that I missed, but I learned to accept that in order to live a rich life, I needed to adopt a simpler lifestyle and be grateful for what I did have, instead of longing for what I didn’t.

Today, this smiley little man leaped out of bed to sing me Happy Birthday before climbing into bed for our morning ‘cuddle shop’. I really wanted a massage and to go out for a nice dinner, but given the current situation that was obviously not going to happen. It would be easy to become annoyed and frustrated that I was not going to get my birthday wish, especially after spending months looking forward to treating myself to a day of pampering. I was once again longing for something more than I had, something that made me feel special, perhaps even something that allowed to me to detach from this reality of simple living, even if it was just for a day. Having it go pear shaped has reaffirmed how important it is to not seek happiness through external sources or experiences, rather to find it within ourselves and all that we do have. 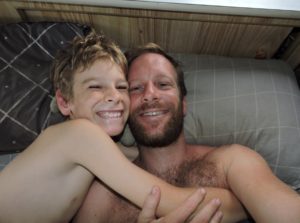 In a world driven by consumerism and materialism, little emphasis is placed on showing gratitude for good health, family, or having access to the basics such as food and housing.

Today, I am grateful that we are healthy, have food to eat, a roof over our heads, and that I am spending it with my loving boy whose lack of singing skills are made up for by his awesome cuddles.

Now, more than ever, we need gratitude in our lives.