It’s not a pristine beach, nor a picture perfect sunset, but these are the pictures that I love most. The ones with kids playing happily.. 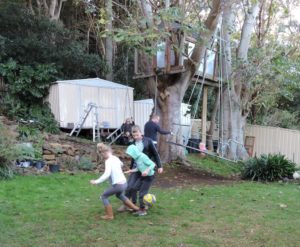 On our way South from Queensland we stopped in and saw some friends of ours in Kiama. This is the same lovely family that, after well over 12 months of knowing “online” we met for the first time in Wagga a month or so ago. The initial plan was to stop somewhere in Newcastle and avoid Sydney altogether. However Esther successfully convinced me to brave Sydney traffic, on a Friday afternoon.. Somewhere between 4pm and 6pm, whilst I sat staring at cars taillights and moving at a snails pace, I may or may not have regretted the decision.. After setting off at 7am, we arrived at their place just after 7pm! We were welcomed with a nice fire and homemade gluten free Pizza, so it made it that little bit harder to want to yell at her for convincing me that driving through Sydney was a good idea.. Despite being single digits, the kids happily played well past bedtime.

Given both Jaiden and I enjoy their company, it wasn’t hard to convince us to stay another night. Apparently Esther had already endured enough of us and decided to spend the next day in bed avoiding us, she reakons she had a migraine, seemed like a convenient co-incidence to me.. (There you go Joff, snuck that part in, just for you!) Despite Esther being unsociable (ha!), her hubby (Nath) and I piled the kids into the car and went to check feed the fish off the jetty and set the kids free at the park before returning back to their place where the kids spent the rest of the day burning off their remaining energy before yet another delicious meal and a toasty warm fire.

When we first made the decision to travel again, one of the big drawcards for Jaiden was that he wanted to meet lots of new people. A far cry from the child who avoided other children at all costs, or when he did engage, more often than not it’d end in misunderstandings and tears. Whilst it’s still an ongoing process and he does struggle at times, the fact he wants to interact with other children in new environments is a massive win in itself.

This lifestyle isn’t just about snapping that perfect shot of a pristine beach, it’s about making new friends, catching up with old friends and enjoying the simple things in life like some good conversation around a fire whilst the kids play happily.

A huge thanks to Esther and Nath for their gracious hospitality, we’re both looking forward to catching up with you all again. Albeit as far from Sydney as is humanly possible…