WE MOVED INTO A HOUSE! (sit)

Ok, so technically we didn’t even move into a house sit as were still living in the caravan, but anyway… For those of you who watched our live stream a couple of months ago you’ll know we were planning on heading out West to do some Fossicking, visit the Dinosaur trail and continue West-ward to Uluru.

As sometimes happens, not everything went to plan. I started having the some headaches that saw me making trips back and forth to Brisbane so I could see a Chiro. We then discovered the diff we’d recently installed in the car needed to be replaced. These couple of things wiped a fair bit of our savings out but we knew we’d still be able to make ends meet, so we were waiting until the end of school holidays before heading off. 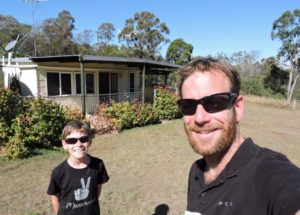 Late one night I saw a post on a Travelling group that someone was after some house sitters for 9 weeks not far from where we lived before we went travelling. We’d already been stationary for some time and were both itching to be back on the road exploring. So I didn’t really give it much thought. The next morning I just happened to mention to Jaiden that I stumbled across this house sit, instead of being disinterested in the idea of being stationary for longer, which was what I expected, he was keen on the idea! Mainly because it meant we could save more money and he could spend some time with his old friends. He had a good point! I gave it some thought and the next day I contacted the person who put the post up, we decided on the dates and a deal was done.

We’ve only moved 120km down the road, but we are in an area that we have lived in before which is oddly nice. Living on the road you get used to being lost all the time, where’s the library, where’s the Laundromat, where’s the servo, what isle are the bloody crushed tomatoes in?! We love our life on the road but sometimes being somewhere familiar is a nice change. On top of that we’re back enjoying running hot water, toilets that don’t require emptying, endless power, a full sized kitchen and the other luxuries that we get used to living without. 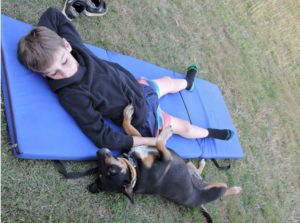 We’ve been here a week now and Jaiden has loved playing with and caring for their dog and 2 cats and I even found a tomato plant that had self seeded so I have been attempting to rescue and revive it so I can get my gardening fix. Having gardens and animals are probably the things Jaiden and I miss the most whilst living on the road, so this is a nice little taste of home life.

The nicest thing of all has been catching up with friends. We both love meeting new people, but having some old friends around really is a nice change, especially when they let you raid their veggie garden (Thanks Trina!). I often tend to have the same 20 conversations with people I meet, so seeing some familiar faces is always enjoyable. Jaiden has already caught up with some mates and he’s hoping to make some new friends through the local homeschooling community whilst we’re here. Sure, it’s not what most people would consider a holiday destination, but there’s a lot to see and do in the area so we’re looking forward to getting out and seeing some of the sights we never saw when we lived here as well as catching up with even more familiar faces.

As with everything in life, it’s what you make of it. We’d love to be out west fossicking for Opals right now, but instead of being bummed about it we’re grateful to have this opportunity in an area close to people we know and love. As I say over and over, it’s not about the destination, it’s about the journey!