I gave my BMX Bike away

I gave my blue BMX bike to a boy named Elijah because I wanted to be kind and I like helping people. I got a mountain bike a little while ago so I did not need it.

We met Elijah when we had to move campsites and we stayed at his house on the way to Kilcoy. His house is in Blackbutt which is where we used to live. 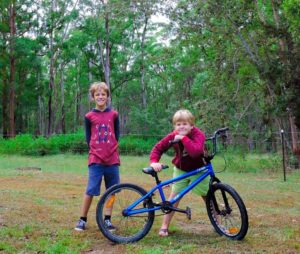 Elijah is homeschooled like me and he is 7 years old, so I’m 4 years older than him. At his place there are Chicken’s, a Dog called Hugo, and a Galah called Dak. We also played Beyblades, Bakugan, Pokemon, and we also watched some shows on his TV. While we were there my dad helped wire 12 volt stuff into their caravan.

He was VERY happy to get a new bike so we did some riding up and down their driveway together. We said Goodbye and we started heading to Kilcoy.