Today I went to a Parkour and Gymnastics class at the PCYC Bathurst with some homeschool kids. I did some fun stuff but one thing I could not do is climbing up the big rope. I was able to balance on the balance thing and I did not fall off, I got to jump on a big and skinny trampoline and I tried to land a front flip but I could not get much air because I did it too early when I was near the ground. I also got to jump on a long trampoline and when I jumped I went so far. There was a little white square trampoline and you have to jump over this red thing and I was able to land it a couple of times. I also got to jump 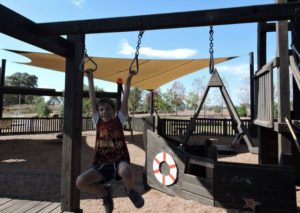 over these blue triangles where I had to put 1 hand in the middle and the second hand near the end. I had lots of fun.

Then I went to a homeschool meet in Orange at an adventure park and I had lots and lots of fun playing with the kids. For the first time ever I made it to the other side of the monkey bars one time and I was SO happy! There was also a cool track to ride around on a bike, scooter or skateboard but I did not bring my bike which made me a bit sad, but I had so much fun so I was SO happy! It was a great day.

P.S. My dad was exhausted, hahahaha