Yesterday I went to a karate lesson at a place called Karate 4 Kids. I was very scared when I went in with my friend Noah because I thought it was going to be hard. When we were going to start the lesson I got a bit more scared. We had bow to the Sensei (which means teacher in Japanese).

Then we all had to do 10 Pushups and 10 starjumps, then doing some running from wall to wall for our warm up (just like in a car before it races). I had to find a wrestling partner so I chose my friend Noah. We had to put our hands on each others shoulders and try to push, pull and turn your opponent to the ground on their back. I got Noah down to the ground every time. The next wrestling activity was to lay on them so then they can’t escape, I did well to keep Noah on the ground and I escaped when he had to hold me down.

Then I did some kicking against a little pad and I learned how to block and deflect if I am being attacked. We then played a game and I think it was called blues where you run or hop around the blue rectangle (like a dog circling sheep). When it was over we went to the park I had a play until it was time to go. 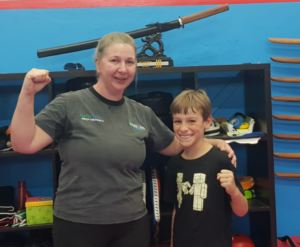 When we got back I fed the dog and the cats and we had some salmon for dinner. After dinner I went to read my new favourite book from the Blackbutt South Burnett Library by Chris D’lacey which is called Dark Fire. I’m up to page 220 and 221, but there are 4 more books in the series and my one is book 5. no.4 is called The Fire Eternal, no.3 is Fire Star, no.2 is Icefire, .no1 is The fire Within.

My two favourite parts were wrestling with Noah and me being brave and conquering my fear again. I am going to keep going to Karate until we leave our house sitting and then I will do some lessons from YouTube.