Where once I was blind, now I can see!

I love cooking, even more so when I can see what it is I am cooking! One of my pet hates with our caravan initially was the terrible overhead lighting when off grid. Trying to prepare dinner was like playing Russian roulette with a knife, I could see so little I knew it was a matter of time before I took a finger off, or worse yet, burn dinner!

I initially toyed with the idea of removing the 240v light in the exhaust fan and re-wiring it to 12v so I could put in a LED bulb, quickly I realised that just disassembling the exhaust fan was a job in itself so that went into the too hard basket.

Peel the protective coating back and slide it in!

Considering I had just installed a 12v socket in a cupboard in the kitchen,  some leftover connectors and LED tape, I decided to put in some LED stripping! I started with a 30cm piece before deciding that lighting up the kitchen with more light than the sun was the way to go, so in went 1.5m of LED stripping! I did toy with the idea of a dimmer but decided all the light in the world was the way to go, so I ditched that idea for a simple on / off switch! Whilst the adhesive that comes on these strips is 3M stuff and ‘should’ do the trick, I’ve found in the past it lasts about 6 months before it starts to peel off. Instead, I put some decent double sided tape down and attached the sticky side of the LED strip to that. (12 months on and plenty of heat and moisture, it’s still sticking!) 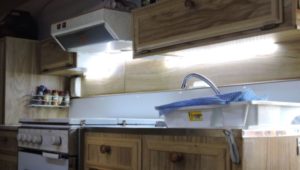 I already had some connectors left over from previous LED strip installations which make these kinds of installs super easy. I just spliced into the wiring from the feed going to my pre-existing 12v plug, installed the connectors and away I went! It’s as easy as peeking back part of the protective coating, making sure the + terminal connects to the side with the red wire, and clipping it back down!

For those interested, these are the LED’s I used are here

The connectors are available here

Dimmers can also be found here