See that kid with the snorkel and a proud grin on his face? See that ocean behind us? Oh yeah, that happened!

We left Hughenden and made the trek east to Townsville. After spending the best past of 10 months in Rural Queensland arriving was, well, interesting! 3 lanes of tr affic, traffic lights, shops and people galore, it was a total culture shock! We were driving along and even Jaiden said “hey Dad, look, a Taxi! I forgot about Taxi’s!” Despite this, it was nice to see the ocean for the first time in 10 months.

After researching places to snorkel we quickly ruled out the Whitsundays because it was going to be a $600+ day just to snorkel the islands, this was a hit that our budget could not take! After a bit more research we realised we could go to magnetic Island for less than a ¼ of the cost. Sure, it’s not the best of the Whitsunday Islands, but it was within our budget, which helps.
We jumped aboard the Ferry (about $40 return) and made the trip over to the Island. Because we didn’t have to pay huge amounts for a boat ride to the reef, it left enough in the budget to hire a car. Of course, when you’re 11 years old the idea of a topless car is the coolest thing in the world, so another $100 later we had ourselves a car for the day from Tropical Topless Car Rental. We spent 20 minutes driving around the island like the tourists we were before heading to Pleasure Divers Magnetic Island to grab some snorkel gear. The guys were super helpful and knowledgeable and pointed us in the direction of Geoffrey Bay which was a good snorkeling site given Jaiden’s age and swimming abilities. 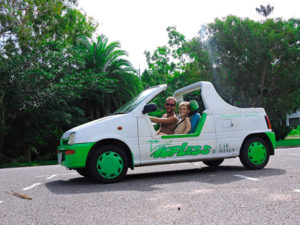 Jaiden’s face was beaming with excitement when we arrived, but I knew there was still a chance it was all going to go pear shaped once he entered the ocean. We’d opted to hire a bogey board for him to use as a flotation device for the 300m swim to the reef. Much to my surprise, he opted not to use it. Once we’d donned our stinger suits we climbed into the beautifully warm water. After taking some time to practice breathing with the snorkel, we started the swim out to the first site. I lifted my head above the water and could hear Jaiden breathing so quickly it sounded like he was hyperventilating.

He stuck his head above the water and said “I want to go back, I can’t do it”, this was exactly what I had feared. I told him to hold onto me and relax. I explained that he needed to concentrate on slowing his breathing down and re-assured him that if he calmed down, he would be fine. We continued on and not a minute later the sea floor rose and not only revealed a heap of coral but a small school of fish swimming by. Shortly after we reached the first buoy, Jaiden lifted his head out of the water and announced “That was amazing! It was like I was swimming with the fish!” At that point, I knew this was going to be an unforgettable experience. We spent the next 90 minutes swimming around looking at the coral, fish swimming by and giant clams. Each and every time he’d lift his head out of the water his smile grew bigger.

We decided it was lunch time and made the swim back to shore before getting in our roofless clown car and heading for a bite to eat. I broke the number one rule – Never eat at an empty restaurant. Alas, we paid top dollar for a pretty crappy meal, and were still hungry afterwards. We spent some more time driving around in our clown car and made a stop to get some nuts and fruit to munch on. Given there was still a couple of hours left before out snorkel hire expired we went back and did some more snorkelling.

This time Jaiden confidently swam out to the first buoy before announcing that we should continue on to the furthest one, which was the site of an old shipwreck. I asked Jaiden if he thought he was ready to dive down underwater rather than staying on the surface. I got a confident “Yep” in reply. A few seconds later I was watching my son, who was once fearful of the ocean and petrified of sticking his head underwater, diving down and swimming amongst the fish. It’ll be another one of those moments that sticks with me for many years to come. 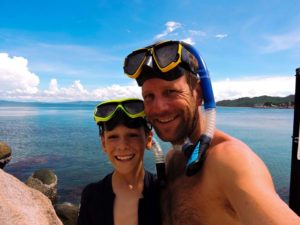 “Dad, is coral hard, or soft?” he asked, to which I replied “Well it depends on the type of coral, if you are very gentle you can touch it and see what it feels like” He spent the next 45 minutes touching different coral and swimming amongst the fish, at some stage he was swimming right behind a 45cm fish, following it as it swam between the coral. He got back to the surface and says “I was swimming like a fish! Snorkelling is the best thing ever! Can we move here dad? I want to do this every day!”

We took our snorkel gear back and drove around and explored some more of the island until we’d used up every last included kilometre of the car rental. We jumped back on a ferry and on the way back I looked across at Jaiden to see him staring out the window, with a slight smile on his face. He looked at me and said “I actually can’t believe I did that, I swam with the fish, I am so happy I didn’t give up and go back to shore”

Yet another unforgettable day where Jaiden not only conquered a fear, but he discovered the joy that exists just on the other side of his comfort zone.