A leak in the caravan and wood rot… Oh Noes!

My worst nightmare…. A water leak and wood rot! Arrhh!

Today we started packing the van ready to hit the road, what was meant to be a 30min job of packing stuff away quickly went south when I discovered some wet wood, I put my hand onto the area and it literally fell apart with just the lightest touch. After finding the cause of the leak (a badly sealed water filler) I rectified it and we ditched the packing plans and I set Jaiden loose with a hammer to smash out the affected panel. There’s something about saying “Here, grab the hammer and smash this” that gets the attention of a 9 year old.. 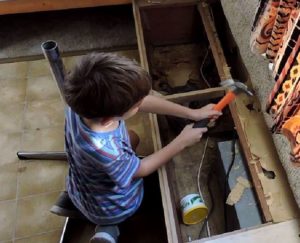 Some genius somewhere along the way decided to use MDF under the chair, which once it gets wet loses all structural integrity literally and turns to mush, much to the amazement of Jaiden. After spending an hour painstakingly scraping the remaining glued MDF mush and removing the 54 billion nails we were left with a clean surface to mount the new wood. Thankfully the caravan is alloy frame so there’s no worry of any major structural damage.

Jaiden then measured the area that needed replacing and we jumped in the car and headed to Bunnings Caloundra  to find some wood to replace the panel. We found some marine ply however it was 70mm too short, so after some discussions we decided to make a small second section to make up the extra length rather than buying 2.4m of ply for twice the cost, after all we only needed just over 1.2m. Annoyingly Bunnings could not cut the wood as their saw was broken, a little annoyed with the “Oh just buy a circular saw” response I got from a team member, we bought a $15 hand saw, all to cut a $12 piece of wood, the budget didn’t need that, but anyway.

We got home and Jaiden helped me mark out the wood ready to be cut and an hour later it was all nailed back together and we once again had a nice stable seat to sit on free of wood rot. 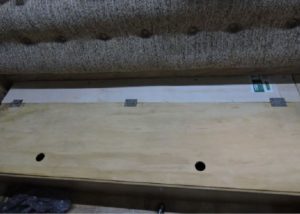 Jaiden regularly puts things into perspective for me, when I first found it I was totally gutted, I showed him what had happened his response was “it’s not the end of the world Dad, we can fix it you know” At the time it really wasn’t what I needed to hear, but in reality, he was absolutely right. It’s so easy to let these setbacks get the better of you, his optimistic perspective was just what I needed and instead of packing we spent the arvo working together and fixed the problem whilst having lots of fun and learning new skills along the way.

To be honest, there’s really nothing else I’d rather be doing.