A proud Dad moment. Except, it’s not my kid!

3 years ago we met Toby, who was 14 at the time. Toby and Jaiden connected at an unschooling camp and really hit it off, despite the 6+ year age gap between them. Toby had a really rough trot at school, dealing with severe anxiety, failing grades and was constantly in trouble. His parents didn’t know what else to do, so they decided to homeschool him and were following a child-led unschooling approach, similar to what I do with Jaiden.

I asked Toby’s mum if he’d like to come out and visit us and she agreed it would be good for him. At the time we were renting a 5 acre property West of Brisbane. Being a “City Boy”, Toby was certainly like a fish out of water, but when he spotted Jaidens Quad Bike, his eyes lit up. I informed him that it was not running and suggested perhaps we could take a look at it later on and try to get it running right. That night we both sat on the floor in the shed until 11pm replacing parts. I taught him the basics of how an engine works as we went and eventually it was back together and it fired into life, first turn of the key. 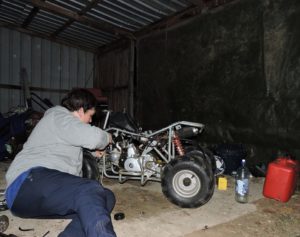 The next morning he was chomping at the bit to go and ride it, so off he went at 7am in the freezing cold to enjoy the fruits of his success. Over the next few days I taught him the basics of driving a manual car, we did some repairs on Victors van and spent a bit of the time doing donuts in the back paddock. I knew it was a new experience for him, but I never knew it would have such a large impact.

He returned back home and instantly went searching for a dirt bike to buy. He bought a bike needing repairs, fixed it up and sold it for a profit shortly after. He bought another bike, fixed it up, and sold it for profit. This process continued and with each and every bike he’d learn a bit more about how they worked. He’d found his passion.

Knowing he’d need some qualifications to pursue a career in the automotive world he did a Cert II in Automotive Cylinder head reconditioning before starting a Cert II in Engineering pathways as he was unable to find an apprenticeship. The engineering course taught him skills like welding, fitting and turning. As a part of the Engineering pathways course, he needed to do a week of work experience which he completed at Daimler Trucks. This ultimately led to Toby landing an apprenticeship by proving his work ethic during his week there. In a few years he’ll be qualified and if he chooses to, he can then go to university and further his studies, all without a year 10 or year 12 certificate.

The “What about university” is a common question that people who homeschool get. There are so many pathways into higher education that don’t include formal schooling, Toby is proof of that.It would have been easy for his parents to tell him to “suck it up” and struggle through school until year 12 so he could try and get into university, but with no real idea what he wanted to do or what his passions were, that probably would have been in vain.

There is a huge amount of emphasis placed on schooling and academia. The thing is, not everybody has a brain that is wired that way and some people are just better at hands on tasks, and others have skills and interests that are not covered in the school system. The problem with so much pressure on school grades, it often makes kids feel like failures if they do not get good grades. 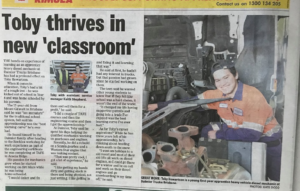 I walked out of school at 16 genuinely believing I was a total moron because I didn’t get good grades at school. I thought the best I was ever going to do career-wise was get a job at a skate shop and sell skateboards. Because that was the only thing I’d ever been good at and had knowledge about. Nothing at school interested me so other than skateboarding, I had no passions or interests and just assumed that I wasn’t intelligent as I’d never been a ‘good student’..

Regardless, once I was out there in the real world I spent some time in retail, I went on to have a 6 year career in early childhood which I loved, I spent a few years working in operations for an Industrial Catering company and then went on to a career in IT. This happened because I chose careers that I enjoyed, careers that excited me and challenged me. It didn’t happen because I got straight A’s at school or knew what I wanted to be “when I grew up”, quite the contrary. It happened because I was going to fail at school, I had no drive, no motivation and no goals. Instead, I made the best decision I ever did as a teenager, and that was to leave school and get some exposure to the real world which led me to discovering these interests and passions. If we, as parents, spent as much time on teaching the importance in finding our passions, as we do in focusing on grades, we’d have a lot more young adults following their dreams and doing the things they love most.

Hats off to Toby for following his passion despite the setbacks he’s had along the way, because he’s certainly had a few. But, none of this would have happened if his parents (Rose and Guy) had not made the decision to accept that the mainstream schooling system did not suit Toby. Instead they allowed him to leave school and let him navigate his way through life without the pressure of grades. I know there were times that they worried about the lack of academic progress Toby was making at home, which is totally normal. Eventually though, through being out in the real world, he was exposed to something new, something that caught his interest and he’s well on his way to making a career out of it.

I am super proud of just how far he’s come. For myself, it was just a couple of hours spent exposing him to something new. But for Toby, it sparked an interest that turned out to be something that he’d end up making a career from. I’m pretty thankful to have played a small part in his success.