Letting go.. The road to unschooling.

At the start of the year I did something that I don’t do very well, I gave in, I admitted defeat. I stopped trying.

Teaching any child to read can be a long and sometimes stressful process, given the complexity and lack of consistency in English, it’s one of the harder languages to learn. Teaching Jaiden to read has at times, been a very stressful process as Jaidens’ ‘black and white’ mind tried to learn all of the anomalies of Letters, blends, words etc etc.
By the end of last year Jaiden was competently reading fairly basic Prep-Year 1 books that we’d worked through to learn more of the simple letter blends, progress was good, but frustration levels were often rather high. I’d try to 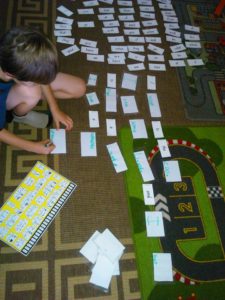 combat this by small sessions of only 5 minutes, reading outside / the local park, the library etc; but I still consistently came up against a little bit of resistance when I’d mention reading. As time went on towards the end of the year and the reading material became more difficult his frustration levels started reaching boiling point regularly as we tried to sound out harder words together, soon my offers of help were only fuelling his frustration and not long after getting him to read anything came with massive resistance. Even online reading websites and games he’d played happily wouldn’t even get a look in.

Teaching Jaiden to read to improve his speech had been a priority, it started to dawn upon me that he was no longer enjoying reading books, nor interested. The whole reason I chose to homeschool him was to avoid this kind of stress and pressure. Given it was Xmas School holidays, I decided that for once I would pay attention to school terms and give us a break from reading. In reality, I was over it, so was he. We’d had so much success, but we’d hit a wall, so I consciously made a decision to stop asking him to read, or offering him help, instead I was going to wait for him to come to me. After all, we have time on our side. I‘d written a post to share here at the time, I wasn’t sure how it would be taken by some people, and given I was already well out of my comfort zone and following my gut, I decided against it.

As an ex early childhood educator that spent a fair bit of time helping kids read and do homework in afterschool care, I thought I had a fair idea of what I needed to do, giving up and taking a step back was pretty hard for me, I must admit. Shortly after I spent some remaining funding we had on a heap of reading material Like Hotwheels, Lego, Star wars etc, stuff that Jaiden was interested in. We have some friends that are teachers and also had given Jaiden a heap of books, by now he had over 200 books, and an entire set of Encyclopedias.

At the end of the first month, Jaiden had only read 1 book from a reading kit we’d used the prior year. A month or so later Jaiden started asking me to read his Lego Ninjago books to him, something that was well beyond his level but he’d been watching the series on YouTube. We agreed to share the reading most of the time, if he said no, I’d not push it. If he agreed I’d read the hard words and he would read the easier words that he already knew, if frustration levels rose, I’d take over. As he’d done with phonics in the past (before it became frustrating!), he started showing an interest in the sounds and spelling of day to day objects and reading road signs. I could see his interest once again blossoming. He wasn’t interested in reading a book with new words, but he was learning 15-20 new words every week just through his natural curiosity.

A few months on, Jaiden started playing an online game where he was communicating with other players. Suddenly my quiet morning coffee time on the back deck was “Dad, how do I spell ….” or “Dad, what do these letters say …..”. Instead of me trying to get Jaiden to read, he was now not only reading and typing happily, he was doing it in own his YouTube/Game time that stops at 9am, doh!

Despite all the progress, there had not been much book reading happening at all. I could see his reading was progressing and doing so happily, so MY need to see him reading books, had diminished. We were still getting books from the library and I was probably reading maybe one of them a week and sharing the reading 50% of the time, but that was it.

As time went on Jaiden started pulling out a book here and there and having a look through it sounding words out quietly. One morning I was eating breakfast and he was looking through a Dr Seuss book, he pipes up “I can read some

of this book you know dad”, I said “Really?” and like that he started reading it, sounding out each word he didn’t know one by one. With each page his smile grew bigger as he saw my smile grow bigger, he got about 10 pages in before deciding he’d had enough. I was over the moon, as was he, not only was he now reading it, but he was comprehending a story that he’d not heard before without any assistance.

Fast forward to a month or so ago, Jaiden came to me asking to read a book “Building a house” before bed, I promptly

agreed before having a look through the book only to discover it was quite difficult indeed. Eek, he’d not read a book in nearly a month now, this could be interesting.. Page 1, he reads everything, including the word ‘different’, wow, I was surprised! Page 2, read it all, including words with that dreaded ‘ie’ blend, winning! By page 6 I am in utter

disbelief when he reads the whole page including words like – trenches, poured, concrete and foundation, by now I’ve got tears swelling up… He makes it to page 8 and the only word he didn’t get was Architect, a word he didn’t even know! I was gobsmacked, he was not only reading and comprehending what he was reading, be he was using tone and pitch to actually TELL the story. I think I spent a good 3 days reliving that moment over and over again, he was reading!

From that point on, Jaiden has been carrying a book everywhere he goes and he continues to want to read everything he sees. Just last week on camp I counted 43 new words he learned to read. It’s been a fairly long and sometimes difficult process for me to let go of what I think education should look like, and instead following Jaidens lead and using his interests, strengths and weaknesses as a basis for an education. It’s been a change in mindset for me, I am no longer teaching him, rather facilitate his continued education using materials, methods and a pace that he can handle.
Once again, the student has been schooling (or unschooling as it be!) the teacher, and I love it.