Life outside of your comfort zone..

7 years ago today, I took the leap and headed off into the unknown..

At the time, people thought I was insane. They told me that there was no way I could travel with a child on the Autism Spectrum. They told me I was crazy for selling every last possession that I owned just so I could drive off in a 35 year old caravan with no idea that it was actually going to work out for the best. One thing I knew was that it felt right, so I did it. When I was a kid, all I wanted to be was a dad, not just any dad, but the best dad I could be. Somewhere along the way the relentless pursuit of material possessions made me lose sight of that, instead falling into the materialism trap.

Over the past 7 years I’ve realised that ‘stuff’ doesn’t really make us happy in the long term. 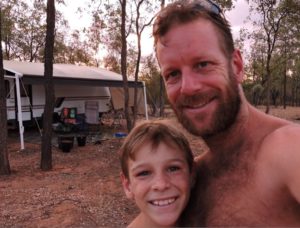 I’ve met some amazing people and made lifelong friends, and at the same time, as my morals, goals and values changed, I lost a lot of long term friends.
I’ve sat on the side of the road and broken down in tears when things went wrong, unsure how, if, or why I should continue travelling.
I’ve had some amazing people whose selfless generosity has helped us through some of the harder times and restored my faith in humanity.
There have been days where I felt that going back to work and living a ‘normal’ life would actually be easier, but I’ve also had many days where I woke up feeling like I am the luckiest man in the world.
I’ve grown as a person, as well as a parent. But there were also times when I wanted to check-out of this 24/7 solo parenting and homeschooling gig, but there’s also been thousands of moments where I’ve been in awe at what Jaiden has accomplished.

Despite the ups and downs, I’ve started each and every day in the best way possible, which is with Jaiden in my arms. I’ve watched him go from a little boy cautiously navigating the world, to a strong, brave and confident young man. It’s been challenging at times, it’s been very isolating, but it’s also been the most rewarding thing I have ever done. He’s taught me far more than I have him, something he’ll probably never truly understand.

The other thing I have come to realise is that life’s too short to be unhappy, unfulfilled, or to let those dreams and goals fall by the wayside. Follow that little voice inside you, do the things you want to do, live like there’s no tomorrow, because for some of us, there won’t be one. Cherish each and every second, every smile, every hug, every kiss. Life’s too short to take anything for granted.

From kind comments online, to people who we’ve sat and laughed with, to those who have helped me through the toughest of times, thank you. You have all played a part in this utterly transformational journey we’ve been on over the past 7 years. Love to you all.