He has Autism? Oh you’d never know by looking at him..

This is a line that I (and many other parents) have heard a million times before. For me, it’s a somewhat bitter sweet comment. In one sense, it makes me happy and proud of how far he’s come but on the other hand, on the inside, I am often saying “Yeah, you have no idea what I live with”. So today, I am going to give you a little insight.
Like many other kids on the spectrum, Jaiden is very sensitive to different types of sensory stimulation, be it touch, sound, sight or smell. This makes seemingly simple tasks like buying shoes, a potential nightmare.

Jaiden spotted a pair of (what he called) ‘Farmer boots’ at BIG W​ a few weeks ago. He was pretty excited at the prospect of having boots just like Andrew, so they came home with us. Despite trying them on in store, after just 100 metres of walking in them (through a wet paddock, sigh!) he started complaining that one of them didn’t feel right and started getting upset. He walked into the caravan, took off his boots, threw them into the corner and said “These boots feel terrible, they are making me so angry, they are the worst boosts EVER!” before grabbing his teddy and curling up in bed and spending 10 minutes crying. 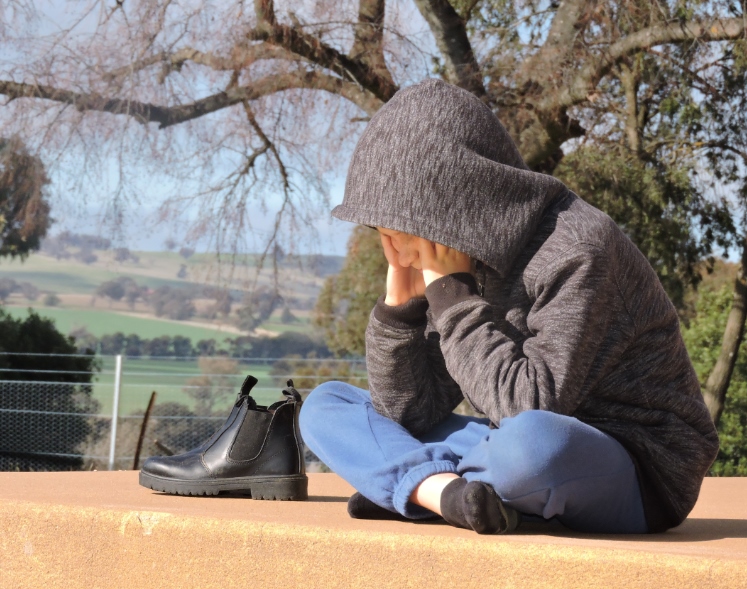 A quick look at them revealed an ever so slightly raised seam on one boot, something that most people wouldn’t even notice. I used some vasoline to try and soften the leather and hid them away. 2 weeks later he found them and I told him I’d removed the second insole and tried to soften the leather, so maybe he could put on 2 pairs of socks and try again. He wanders off and re-appears 10minutes later “Dad, they are all good now! They don’t feel, you fixed them!” and comes and gives me a big hug before wandering off again.

10minutes later, he re-appears with his head down, looks at me with tears in his eyes and gives me the thumbs down before throwing off his boots, grabbing his teddy and climbing into bed crying. I climb into his bunk bed with him and cuddle up to him, he looks at me and says “Why are they so terrible? I just wanted some cool boots to wear like Andrews so my socks didn’t get wet!”

Parenting a child on the spectrum can be bloody hard work, the things many people take for granted become daily struggles. Whether it’s finding shoes, socks or a shirt that are comfortable, getting them to shower and brush their teeth, to eat foods with certain textures, colours or smells, to deal with crowds and bright lights at a shopping centre, following a routine perfectly or simply communicating with their child in a way they understand. These are all things ASD parents are likely to deal with on a daily basis.

Remember that behind that child playing is a parent who faces challenges you could never imagine and they do it every single day, without praise or thanks.

So instead of “Oh, he don’t look like he has Autism”, congratulate them on a job well done, because sometimes just getting out the door is a struggle in itself.