7 Years ago, this little boy not only overcame his fear of the ocean, but he stood up on a surfboard and caught his first wave after 4 weeks of desensitizing him by parking our caravan right by the ocean and edging closer day by day..

When I first took off travelling with Jaiden 7 years ago I had no idea what was ahead of us both. I took off with a child who thrived on a strict OCD-like routine, a child who hated new places and people, a child with major sensory struggles, a child who shut down in crowded places, a child who struggled to control his emotions and would often lash out violently. 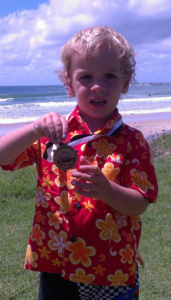 Over the past 7 years, he’s slowly but surely overcome many of those struggles. It’s not been easy, I’ve wanted to throw in the towel on several occasions, in the early days I often lost my temper, I ended up in tears on more than one occasion. I had to remind myself it was him who was having the hardest time. Through focusing on the areas of Jaiden’s development that he struggled with the most, I now have a child who is a shadow of his former self. His need for routine has almost entirely gone, despite his struggles he now enjoys exploring new places and meeting new people, he has learned how to cope with his sensory struggles and tolerate loud and crowded places. He’s learned to regulate his emotions better and remove himself from situations before he becomes violent or aggressive.

It has been a long, hard, and often lonely road to where we are today. By focusing on the areas that give him a better quality of life, he’s become a braver and more resilient child than I ever thought he could be. Some parents are proud of their children’s grades or awards, I am proud of each and every struggle that Jaiden overcomes, these are things that most people take for granted.

It seems fitting that today, 7 years after conquering his fear of the ocean, Jaiden swam an entire 25m lap of a pool. It took hundreds of hours to get him in the water, getting him to stick his head underwater and eventually teaching him to swim, but today is a reminder of why I do, what I do.

I am not saying all kids on the Autism Spectrum will progress to the same extent Jaiden has, but I think many of us underestimate just how capable our ASD kids are.