No screen time – Can it work?

What if your kids did not have access to technology for entertainment? No gaming, no Youtube, no TV, and no Netflix?

Whether we like it or not, technology is and will continue to play an integral part of society. It seems the days of kids playing in the street of an afternoon, or adults ‘dropping in for a cuppa’ are disappearing fast. I’ve personally struggled with this shift to the ‘like and comment’ mentality whereby actual human connection seems to be going down the drain, I rely on technology to keep in touch on the road but also yearn for more human connection, but that’s another post altogether.

A month ago, after an earlier incident that saw him rather upset, Jaiden became frustrated at his laptop, lost control and smashed the screen with his fist. His prized possession was out of commission. Because my parental approach is centred on teaching him the value of making ‘good’ decisions and accepting the consequences when we don’t, I didn’t just rush out and order him a new screen or buy him a new laptop. Instead, after calming him down, we talked about ways we could raise enough money to replace his screen and things he could do instead of relying on his laptop for entertainment.

We have a very different life than most people that sees Jaiden spend a tremendous amount of time learning and exploring the world around us. Despite this, he still defaults to technology the second we’re in the caravan, if I am busy, or want some downtime. I have spent many years reading both sides of the technology debate and bettering my understanding of human psychology to try and help Jaiden have a healthy relationship with technology. I’ve found that many screen advocates will talk about all of the positives that come from screen time and often ignore the long term consequences on cognitive, social, and emotional development associated with excessive screen time. I’ve experienced both the positive and negatives of screen time so I tend to avoid one-sided studies or anecdotal evidence. Instead, I have worked on finding an approach that suits Jaiden, myself, and our lifestyle. There’s a link in the comments for anybody who wishes to read more about our journey with technology.

Because I appreciate that technology gives us the ability to learn pretty much anything within seconds, I was not going to deny Jaiden the use of my laptop to edit video, make music, draw, or research topics of interest. Instead, I decided he would need to find ways to entertain himself that did not include screen time, as this was his default. While technology is a useful learning tool, there’s a difference between watching prank videos, or gamers slaughtering other players, and watching a BBC documentary, or playing Minecraft with friends. It is for this reason I deem it necessary not to put all screen time into one category. 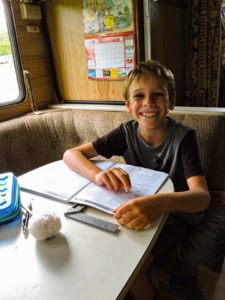 So what has happened without the use of a screen for entertainment? Well, he’s learned to find ways to entertain himself. In the first week he read a 500 page novel, dug out his Lego and built a city, he started drawing comics and painting. Week 2, he dug out a Maths and English workbook that I didn’t even know he had and proceeded to complete 6 months of worksheets over the next 2 weeks on his own accord and was incredibly proud of himself. We’ve spent more time playing board games or just sitting and talking, he’s started asking to help cook dinner every night and has cooked breakfast unassisted 5 out of 7 days. He literally just delivered me pancakes in bed, as I write this post, that he made from scratch. Instead of being content sitting in front of YouTube, he’s found new and creative ways to entertain himself which have often resulted n new learning opportunities. Quite simply, he has become happier, more confident, creative and proud, especially when it comes to his reading, book work and cooking. While Jaiden is working on some projects to raise money to replace his laptop screen, even he admits life has been better since his laptop met its demise, something I never expected to hear come out of his mouth!

I don’t know where the happy medium is, nor do I know the secret to educating kids (or adults) how to have a healthy balance between the online world and the real world. Instead, I just wanted to share our experiences with you all. Technology usage is a very divisive topic and one that parents often struggle with, especially when there are so many conflicting opinions out there.

If one thing is for sure, it’s that technology is not going anywhere. It’s up to us as parents to model good behaviours around technology and find approaches that suit our children best. As with all things parenting, there is no one size fits all approach and what works for one child can have negative consequences on another.

As with my last post on screen time, I’d love to hear how you balance technology usage with your kids, and yourselves!