Putting kids in cars with strangers….

Usually, watching a loved one drive away is not something we like seeing.. But today, seeing Jaiden drive away is probably the happiest and proudest I’ve been for quite some time.

As most of you know by now, Jaiden loves cars, especially old cars with V8’s. So when Gary (the son of Elaine and Ken from Barcoos Farmstays Bathurst​) started up his old V8 Fairlane a week or so ago Jaiden ran into the van and said “Dad! Hear that thing! It sounds sweet! It sounds like a old school V8!”

Somewhat of car a nut myself, the next day I asked Gary about his car and mentioned Jaidens reaction. At the time he said if he found some time he’d take Jaiden for a ride in it, Jaiden was super excited when I told him but I also mentioned that Gary was busy and if it doesn’t happen, than he needs to accept that.

This afternoon I was amidst trying to reshuffle the logistical nightmare that is doing an engine swap on the road as well as packing up ready to hit the road when Gary approached me and asked not only if Jaiden would like to go for a spin in his Fairlane, but if he’d like to go and do soccer practice with his son. I asked Jaiden and his face absolutely lit up, I broke the news that he’d have to go by himself because I had phone calls to make and a caravan to pack and hitch up. Undeterred he dropped everything, grabbed a bottle of water and sat there waiting to hear the sound of the old V8 firing up. Whilst we waited we sat down and had a talk about how to deal with any confrontations or difficulties that may arise and came up with a plan on how he’d deal with it.

A few minutes later Gary arrived and without hesitation Jaiden jumped in, knowing very well he was getting into a new car, with someone he’d only very briefly met and was headed to play with a group of kids in an environment that he’d never been in before.

As the car drove away I, well, got a little welled up and then the worries quickly kicked in.. Ya know, the old “What if” scenarios that often play out inside our heads. As I continued packing and cooking dinner those worries were only getting worse, is this going to be a terrible experience that will do more harm than good?! What the hell have I done sending him into a competitive environment he’s not used to without me?! Recipe for disaster, I think so. 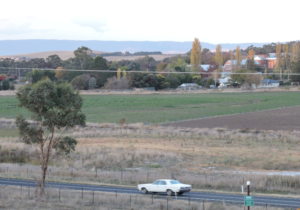 A couple of (long) hours later I heard the unmistakable rumble of a V8 entering the property. Jaiden exited the car with a smile on his dial. After a quick chat it became clear that although Jaiden had a ball, he was feeling a little sad that he’d not scored a goal and that the kids were (In his words) “much better than me, I was terrible”. I reminded him that these kids practice weekly and if it were to come to things like skateboarding, the practice he’s done means he’d be far better than most of them, it’s all effort. Playing in a competitive environment is very new to him, so it was somewhat expected, especially for a child who is a bit of a perfectionist. Despite him being hard on himself I was so proud that he stepped so far out of his comfort zone and not only went out without me, but did so whilst being accompanied by someone who he barely knew and then entered into a situation knowing it was going to be a big challenge to compete.

5 years ago Jaiden hated most kids, he hated new people, new environments and the idea of doing something new without me was one he’d often not tolerate. People told me that taking a child on the Autism spectrum was a terrible idea. Yet here we are 5+ years on and he’s learned that there’s so much fun to be had on the other side of his comfort zone. He’s wanting to try new things, meet new people and go in “cool cars”..

Watching him drive away was not just a moment that made me proud, it reminded me why I do what I do…