We stayed in Longreach for 11 days. We went and saw the Qantas Founders Museum, Longreach, Queensland​. There was a plane simulator, a few plane models that go on a track on the roof (which sadly were not working), a Model T Ford which was like the one that Hudson Fysh and Paul McGinness drove from Longreach to Darwin off road in 1919. After this trip they decided to start Qantas because they realised flying was better than driving.

There were also some cool jet engines, lots of old planes, a gallery and a theatre. Outside there was a Qantas Boeing 747 which looked like it had 3 engines on one side and two on the other. But that third engine was actually used to carry a spare engine if another plane broke down. We could not see inside the 747 because they are building a roof to cover the plane. My favourite part was the flight simulator and learning about how the aerodynamics of plane wings work to make lift, thrust and drag. 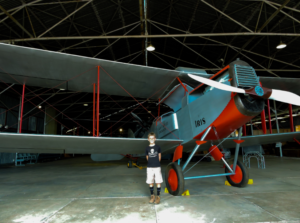 We went to the Longreach School of the Air​. They did school work for homeschoolers over computers. The teachers would give them questions and they had to answer them just like in actual school but using a webcam. Lots of the kids did not go to school because they lived on cattle stations and farms or were a long way from schools.

Where we were staying there were some travellers that travel with a dog named Punch, Punch the Pinscer. Punches owners names were Michelle and Terry, and we took punch for a walk to the weir which was over flowing because the water level was rising from the floods. One day I also babysat Punch and Michelle paid me $10. We also took another dog for a walk named Venus and her owners name was Sarah, we met Sarah because she was one of the staff members at the Qantas centre.

We also had a skate at the skatepark, had a few swims at the pool, and saw some old stagecoaches which were pretty cool but they were not doing tours because it is summer.

Look below for more pictures. I also made a video which will be below.