See the tiny little spec at the top of that massive rock wall? Yep, that’s Jaiden! 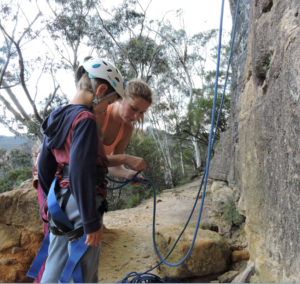 Our friend Kasia is a keen rock climber and any time she’s not at work, she’s out climbing. When she offered to take Jaiden out for a climb, there was no way I was going to pass up the offer! I‘d planned to keep it a secret from Jaiden and surprise him but I am terrible at keeping secrets, so he was soon in on the secret and today we on a mission to hire a kids harness (thanks to Blue mountains adventure company!) so he could give it a go!

After a bit of a shaky start trying to navigate the first section where there was nowhere for him to hold onto, he soon found some rhythm and started making his way up the crag whilst taking directions from Kasia regarding his foot and hand placement. 20 minutes later he’d made his way to the top (near on 70ft up!) before abseiling his way back down accompanied with the hugest smile I’ve ever seen on his face when he hit solid ground.

A huge thanks to Kasia and Matthias for taking time out of their own day of climbing to give a little boy such an unforgettable experience. Sitting with Jaiden and watching the video back and seeing the pride and joy on his face was absolutely priceless. 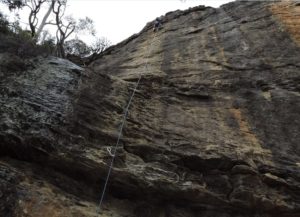 Feeling so very blessed to meet such amazing people who make this adventure of ours so very special.