This might look like a kid having some fun at a skatepark. But in reality it’s a kid learning to face his fears, push his own limits and not give up. These are skills we need in life, not just at the skatepark.

Jaiden has been riding a skateboard for some time now, but just recently he’s gone from enjoying the odd roll to spending a lot of time on it, even just skating backwards and forward in the shed. Because of this increased interest we have been making a few more trips to skateparks when they are nearby.

A couple of years ago, he attempted to drop into a quarter pipe for the first time, it didn’t end well. Dropping in is an INCREDIBLY scary thing to do as your mind does its best to convince you that learning forward into a scary looking ramp is a terrible idea. Whilst Jaiden can roll down large ramps, dropping in on a quarter pipe as been something he refused to try, probably because he remembered having a bruised backside for a week…

Last week after a chrio appointment I took him to the skatepark and he conquered that fear, dropping in on a mild 2ft quarter pipe for the first time. 20minutes later he was staring at a larger and steeper quarter pipe doubting himself, I knew he could do it but his mind was telling him otherwise. He eventually cracked it and said “FINE, I will do it!”, he walked up and absolutely nailed it first time. Despite a large number of other kids at the skatepark he was jumping around and cheering like he’d just won Olympic gold.

Fastforward to today, we went to the local skateprk and Jaiden started eyeing off another quarter pipe to drop in. He spent 15 minutes battling his own mind trying to commit to dropping in. I mentioned that the larger (5ft+) quarter pipe would actually be easier, as it allowed him more time to react. After walking to the top and looking down, he instantly dismissed it as too scary. We sat down and talked it out and he began the battle against his mind. Walking up and looking down the massive ramp, telling himself he could do it, he got angry, he got sad, he even threw his board out of frustration.

Eventually he’d had enough, he wanted SO badly to do it, but the fear was holding him back. He gets up and grabs his board “RIGHT! I am going to do it!” before walking to the top of the ramp, sticking it over the edge and executing an absolutely text book drop in. I ran over to hug him and he was fighting back tears of joy and this time it was me carrying on like he’d just won Olympic gold. He picked his board up and went and did it again, and again, and again, and another 20 odd times in a row. Each and every time, he rolled away with a smile from ear to ear.

I have spent a long time telling him he is capable of doing it, because I knew he was. However I also explained to him that until he believes that he can do it, he probably won’t. We got in the car afterwards and he said to me “Well, I gotta say, you were right, that was easy, but it was pretty scary until I just did it, then it was super easy”. 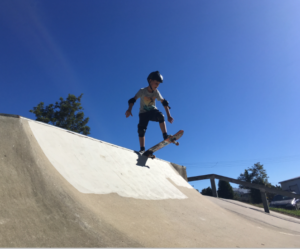 It would come as no surprise to know that I love home educating. But the biggest benefits and progress I see in Jaiden are not about the academia. It’s about allowing him the time to use his interests to push himself WAY outside of his comfort zone, to try something knowing that failure is not a bad thing. Rather, that trying something new and scary is one of the bravest things anybody can do. The best part is that he did it all because he wanted to, he wanted to achieve something new and despite being absolutely shit scared and knowing very well he could end up in hospital, he did it anyway. These skills are far harder to teach than English or Math and they are skills we keep with us for life

I often struggle with being brave enough to step outside of my comfort zone for fear of possible judgment, failure, or whatever else my head comes up with on any given day. I am not entirely sure what it is that creates this sense of fear within us, the fear of being vulnerable or failing in front of our peers, but I am pretty bloody happy that Jaiden doesn’t have it and is instead beating to his own drum.

It sounds weird to say, but he so often inspires me by the way he approaches things. Proud Dad doesn’t even come close to explaining how I feel