The best breakfast ever..

This isn’t just a plate of scrambled eggs. It’s a plate of love, compassion and empathy. 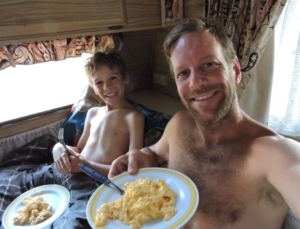 In my youth, I lived and breathed skateboarding, it was my life. As I reached my early 20’s the niggling sore back I’d experienced since I was 15 had started to impact my job, so I made the decision to give up the thing I loved most. From then on, I had to accept that my progression in skating was a thing of the past, which was incredibly hard to accept given the entire sport is based around progression. I learned to settle for a leisurely roll around the skatepark and a few small tricks instead of my earlier pursuits which were all about going higher, faster and pushing my limits further with every skate.

A few days ago Jaiden had a mate come and sleepover, he just happens to be learning to skate. We took a trip to the skatepark so I could give him some pointers as helping kids progress on their board and push their own boundaries is something I love to be a part of. Somewhere along the way, my causal skate got a bit more serious and I found myself in the middle of a 30minute battle to land a trick, one I should not have been attempting to do off this particular ramp. 25-odd tries later, I landed the trick and away I rolled away pleased with my efforts. On about attempt 20, Jaiden asked me if perhaps I should stop trying, I snapped back at him with some remark about not giving up and went on trying.

I was a tad sore in the afternoon but by the next morning I woke up and was in excruciating pain, unable to bend down, turn or twist. 1.5 hours of stretching made no difference so we spent most of the day in bed, watching Christmas movies, playing cards, board games and hangman in bed so I could lay down. The day after was not much better, by now I was getting quite frustrated. Jaiden said to me “I knew you were going to be sore Dad, that’s why I said to stop trying”, and he was right to suggest that. He’s grown up with someone who lives with chronic pain and has learned to deal with those limitations, even if I have not accepted those limitations myself. When he went to bed last night he said to me “Dad, I know you really wanted to land that trick and if your back is not better tomorrow, I am going to make you breakfast in bed”, I thanked him and tucked him into bed.

I woke up at 4am, unable to sleep from the pain. I decided to make the most of it and go outside, meditate, stretch, and watch the sun come up. I’d just sat down in bed with my laptop when he woke up. Instead of his “Christmas countdown”, the first thing he said to me was “How’s the back today dad?” I informed him it was getting worse. He jumped up out of bed and started going through the (nearly empty) fridge, “Bad news, there’s not much food left, so it will have to be scramble eggs” which he set about cooking for me, whilst simultaneously acting out the role of the waiter and the chef. He delivered my breakfast and proceeded to say “Excuse me sir, may I join you in this bed table?” which of course there was only one answer to.

We live in a world where so many people thrive on pointing out the mistakes and shortcomings of other people. Yes, on the surface, I made a silly choice to push as hard as I did on my skateboard knowing I have spinal, back and shoulder issues. But, it was a choice that I made fuelled by the passion of doing something I love, something I miss pursuing dearly. Instead of pointing out my mistake, Jaiden understood I’d made the decision for a reason. Not only did he have to contend with my frustration, he went out of his way to make my life that little bit easier whilst I recovered. Many of you praise me for all I have done for him, but he’s forever making me stop and look at the world from a difference perspective. In this instance it was a perspective of compassion, love and empathy, instead of one of judgement, belittling, and ridicule for making a poor choice.

Each and every one of us is fighting our own battles and sometimes they cloud our judgement. Imagine the world we’d live in if we all remembered that, instead of judging others based solely on their actions.