The life of a worldschooler..

It’s not every day you step outside and a family of Brolgas walk by, let alone a friendly one that comes to visit!

Throughout our travels Jaiden has been exposed to a huge amount of native wildlife. But it’s not just him, most of the wildlife we encounter are animals I’ve never seen either, except for in books or on TV. Many people comment on how lucky he is to see and experience the things he does. Yet to Jaiden, after spending 4 of the past 7 years travelling, this is normal life for him. Just like the ‘average’ Australian would be considered lucky to a child in a 3rd world country, the Australian child rarely stops to appreciate, or even understands this concept of being considered lucky. 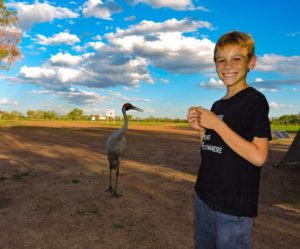 To live as full time nomads Jaiden has to make sacrifices, they are sacrifices Jaiden is well aware of. Be it sacrifices due to financial constraints, due to lack of space in a caravan, or those due to us forever being on the move. They are sacrifices that Jaiden understands are a part of this lifestyle.

I often wonder how Jaiden will look back on his childhood when he grows up. Perhaps he will pursue a life of relative normality, living in the suburbs and working a 9-5. Perhaps his plans to make passive income through his planned business ventures come to fruition and he spends his life travelling the world. Perhaps he’ll do none of those things.

Whatever the future holds for him, as long as he’s living a life that fulfills him, I’ll be eternally happy for him and forever cherish the time we’ve spent travelling and exploring this great country of ours.