Today we are in Cowra

Today we went exploring around Cowra. We went and saw the Lachlan Valley Railway railway museum that had a roundhouse and some trains. My favourite train was a black steam train that we got to go inside, we also went into a old passenger train that had some rooms with double bunk beds that turn into a chair. 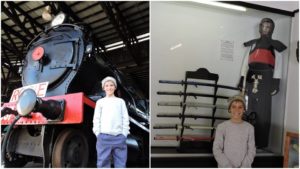 Then we went to the Cowra Japanese Garden and Cultural Centre and we had a look around, there were lots of plants from Japan, some waterfalls and there were friendly fish and ducks as well. We went into a room there and there were some Katana swords and I was like WWWOOOWWWW! The Katanas were my favorite part and the loud Japanese bell that i got to ring, it was very noisy.

I had a good day but I don’t know why all these wars are happening between countries because it makes me sad that so many people die.