A happy kid playing cars, a car that no longer sounds like a tractor and a beautiful view, now that’s a good end to the day..

We planned to pack up tomorrow morning and head towards Newcastle before the school holidays started here in NSW, but one of the things I love most about having no time constraints is that there’s no rush. So when Jaiden said “Dad, maybe we can just stay here for the school holidays, I really like it here” it didn’t take much convincing me, so we’re going to spend 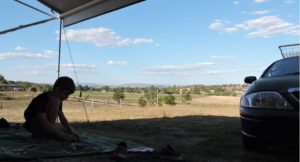 another couple of weeks here! There’s so much to see and do in the area as well as an awesome homeschooling community, so I figured whilst we’re here we may as well stay longer and tick off our “to do list”, so expect more updates of the local attractions over the coming weeks!

For once, I have some good news on the car situation! A guy I know down in Canberra had some extractors for sale that would suit my car, not only did he sell them to me far cheaper than he’d advertised them for, he took the day off work and did a 7 hour round trip to deliver them to us so we didn’t need to hire a car and do the road trip ourselves! Hats off to Stu, you’re a freaken champion of a bloke! The next day we booked the car into an exhaust shop and had them fitted, because there were some modifications that needed to be done to make them fit the current exhaust it wasn’t something I could do myself. Either way, it’s nice to be able to drive down the street without everybody looking at us like our car is a ticking time bomb! Whilst we still have some major gearbox (and maybe engine!) issues to address, that’s a problem for future Cam to deal with, so for now we’re just enjoying life out here!

I’ve also been going through the 300+GB of video we’ve taken over the past 6 months, as we get time we’ll edit some of it and get it up on YouTube. I wrote a couple of articles for WHATS UP DOWNUNDER online magazine that were published in the March and April issues, they also included a bit of video, so be sure to head over and check them out! I’m hoping to launch our website over the next fortnight (Which you’re now reading, yaaay!), I’ve been a bit slack on that front but now we’re going to be spending a bit of time in one place, it’ll give me a bit more time to finish it off and get it up and running! It could also be because I suck at the whole self discipline thing, but that’s another story altogether..

For now though, I’m going to sit back and enjoy the end to another beautiful day with the sights and sounds of the country. Well, that mixed with Jaiden’s car noises and race car commentary..