Travelling with no savings… The realities..

Aright, so I have been putting off writing this for a couple of weeks now, but the interests of sharing our adventures openly and honestly, here goes! It’s time to swallow some pride and update you all on where we’re at! It’s been a while since I wrote a 1000 word essay, given I still have no idea what I am about to write, chances are it’ll be a long one.

As most of us know, things in life often don’t go to plan, we’re no different! When we decided to pack up and travel again I spent considerable time planning out how we’d make it all happen. More than anything, this time around I wanted to be able to give something back to families with children on the Autism Spectrum in the form of loaning our caravan out to them for short holidays or weekends away. When I took off with Jaiden 5 years ago, I did so on a hunch, a hunch that I could expand his horizons and use our adventures as a way to help him move forward, a form of therapy if you will. I’ve been lucky to inspire a handful of other ASD families to follow in our footsteps which is the most amazing feeling, but given that most people are not lunatics that sell everything they own on a hunch it may work, giving families our caravan would at least offer them a chance to experience it.

Initially when Jaiden and I made the decision to travel, we planned to stay in our place for 6 months, buy a cheap caravan needing renovations and slowly fit it out to not only suit us, but for larger families as well. As it happened, the owner wanted our rental house back to renovate so that idea went down the drain. A friend offered us a place to stay in the form of the shed and a caravan at a property they owned, which was going to enable us to buckle down for 6 months, save our dollars and find a suitable caravan. Not long before we moved in there, they decided to sell the property which ultimately left us without a house or furniture and more importantly without a caravan or enough money to buy one! Far from ideal, but I live by 2 mottos “It is what it is” and “Something will happen”, both applied here.

Long story short, a dear friend of mine contacted me and offered to give us a loan to buy a caravan. I was in utter disbelief that after everything, things were falling into place. I was determined to see through my plans of finding a caravan that suited us, as well as our plans to loan the caravan out to families which with a limited budget proved to be rather difficult, actually it was an all consuming nightmare. At this point, I really should have decided to look for something to suit just Jaiden and I, instead I was determined to find something with bunks that would comfortably house a family of 4, at least. Instead of doing that, I borrowed far more money than we initially intended and I poured (quite literally) every cent I had saved into buying the caravan we now have.

They say love is blind and by gosh it was. I was so in love with our new caravan I really hadn’t taken the time to work out just how tight things were going to be financially given we are paying off the loan for the caravan in a year. I planned to have a couple of thousand dollars as a “backup” fund before we set off, but by the time we saved and did the solar ad 12v fit out, it was far less than that. Given we don’t have a house that we own to fall back on, savings, nor do I have a partner to look after Jaiden so I can work and recover financially like many families do, hitting the road almost broke was probably a silly move. Love is blind, and all that stuff… Could be my stubbornness, but that’s another story.

Given the problems I had with cars during our last travels, I was DETERMINED not to have the same this time around. I knew 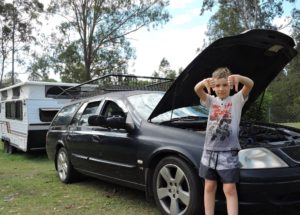 by gearbox was not the happiest or healthiest, so the plan was to save as much money as I could whilst in the Brisbane area to get it reconditioned. Given I have already upgraded the brakes, suspension and cooling system, the plan was to replace the gearbox ASAP and down the track replace the engine with another one with lower KM’s or have it rebuilt too, which would ensure I’d have an essentially new car, mechanically speaking. Other than some minor issues, my engine was running well so I had no doubts it would happily hold up until I was ready to replace it. Ohhh how I was wrong…

As it turned out, the seemingly minor engine issues are in fact, major engine issues! So much so that repairing it is both more time consuming and costly than buying another second hand engine! For those who are mechanically minded, there’s a worn lobe on the camshaft which is causing it to lose contact with the lifter, so it’s been slowly chewing away at the cam, for the past 12 months… Given there’s now pieces of metal all through my oil, it’s days are numbered, so guess who’s doing an engine swap?! I have to give a huge shoutout to the guys on the AUS Windsor group for helping me diagnose it and in particular Brett who’s also been a huge help in helping me move forward.

So, the plan from here is, well, I am not entirely sure. Brett has found me a replacement engine as well as a workshop I can use to do the swap. Now it’s just a matter of finances and finding some hands to help do the swap, which I am hoping we’ll be able to get done in the next 3 weeks. A couple of people have asked me why I didn’t just sell this car and buy another car, the thing is I already have done a substantial amount of upgrades to this car and once it’s all done, I will still have spent less than 6k. There’s not a lot of suitable tow cars for that money, so we’ll be persevering and sticking with this car.

After that, we’ll be trying to find somewhere cheap / free to stay lay low over the Christmas and new year period so we can try and recover financially and do the whole Christmas thing. Jaiden has his heart set on doing the Dinosaur trail early next year around Feb / March which is something I promised him we’d do, so for now we’re just going to focus on making that happen and trying to make the best of a bad situation.

So for now, at least, our “travelling” is on hold but we will continue to document our adventures and share them with you all, wherever or whatever they may be.

It’s been a very emotionally taxing few weeks, much of it self inflicted as I am really good at beating myself up. But, it wouldn’t be an adventure if everything went to plan, right?