Voluntarily doing math on a Sunday night? You betcha!

One of the things Jaiden loves about house sitting for people with kids is having a new arsenal of toys to play with and explore. Just as I start cooking dinner he comes to me and says “Dad, look at all this toy money, there’s like… 10 thousand dollars here!” I reply “Do you reakon there’s that much?”, he looks at the cash and promptly suggests it would be a good challenge for me to count it.. Nice try kid, nice try. Given I was starving and had just started dinner, I offered him help if he needed it but explained that at that point in time Tikka Masala was my priority so he either had to wait for my help, or give it a try himself.. I am all for dropping everything and facilitating some learning, but, ya know, Tikka Masala… 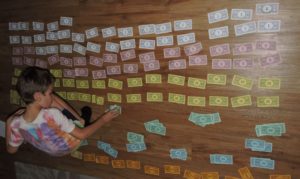 the remainders and eventually coming to the right answer. After double checking his answer he comes running into the kitchen, piece of paper in one hand, pen in the other jumping around laughing and hysterically hugging me like some lunatic that had just won the lotto.

4 years ago he hated writing and he hated me sitting him down giving him maths tasks to do yet here we are at 7pm on a Sunday night celebrating a job well done. Not because I told him to, not because there was any reward or punishment, but simply because he wanted to.

It’s the moments like these that remind me why I stopped pushing him to “keep up” with the national curriculum. Instead I took a step back, allowed his curiosity to lead the direction of his education and I simply became a facilitator. Letting go was such a hard thing to do, everything I knew told me I needed to “teach” him, but all it was doing was driving a wedge between us as he became increasingly frustrated and started to dread our morning lesson time. I never would have imagined that 4 years on he’d be guiding his own lessons, writing willingly and doing so on his own accord at 7pm on a Sunday night.

Oh, for the record, there was $8,303 of play money and the Tikka Masala was sen-bloody-sational.