Unschooling, so what’s the deal with that?

With media attention often being focused on families who unschool and allow their kids to eat chocolate for breakfast and stay up until 1am every morning playing R rated video games, I’m here to share what it means for us.

Basically, it’s schooling flipped on its head. Whilst schooling is the process of having an education delivered at school, unschooling is an educational philosophy that takes place anywhere and is almost solely driven by the child’s interests instead of a pre-determined age appropriate curriculum. Instead of ‘teaching’ a child, we take opportunities to explore concepts using medium that are of interest to our kids. Rather than trying to explain it in great depth, I’ll give you an example. Please note, I am not here to try and convert anybody, nor am I here to bag other educational methods; I’m just sharing how it is we educate.

This morning Jaiden wanted to go to the BMX track, on the way there we were talking about his last few trips there and discussing how much faster and more confident he’s become. I suggested that if we timed the laps, we’d be able to see how much faster he’s getting with each visit, which he was totally down for. I mentioned that we could do something (Graphing) to make it easier to compare his laps on each visit because he’ll probably only have 1 or 2 really fast laps each visit before his legs start to get worn out. He said “I won’t get tired legs, I’ll keep going faster and faster, like thiiiis fast”. I explained that because of the way our muscles work, we only have a fairly small window of peak performance during intense workouts before our muscles start to tire. Jaiden disagreed and we decided he’d do some laps and see what happened to his lap times. 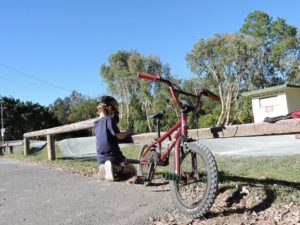 First lap down, 1:09.33. he comes to me “Dad! Feel my heart, it’s still beating! And very fast! It’s like going 1 thousand kilometres an hour!”, I explained that it’s measured in Beats per Minute and suggested I could take his heart rate and we could monitor that too, “Nah, that sounds pretty boring”, “How about we bring my heart rate and blood pressure monitor and use that next time?”, “Is that the thing that goes on your arm and squeezes and tells you the numbers?”, “Yep, that’s the one.”, he smiles and says “Yeahhhh I love that thing, it’s so cool!”. Instantly we had already found a way to expand upon this and delve deeper into how the body works on our next trip to the track.

Second lap down, 1:05.31. He asks what his first lap was and sticks up his fingers, “That was like 1,2,3,4,5… No wait…. 4 seconds faster!”. He walks over and writes it down on his piece of paper before confirming his counting was right. I was quite surprised as in the past he’s struggled with time, often thinking that the bigger the number the faster he’s going. Attempts to explain speed vs time have proven futile and resulted in total disengagement and major disagreements. He pushes back to the top of the ramp “Dad, this time count backwards in Japanese, like San, Ni, Ichi, go! Can you also video so I can see how speedy I go? Also, I need to learn to count backwards from 5 in Japanese, because that’s actually trickier for me”. Again, there was another thing for us to expand upon down the track with his Japanese.

So I grab the camera and count him in, he does a 1:04.70. After writing it down he says “See, I am just going speedier and speedier every time!”, I’m sitting there thinking “Yeah yeah, I’ll make you do 30 laps if I have to prove my point kid!”. He takes off on his 3rd lap and FLIES down the first ramp, suddenly Mr Adrenaline Junkie-No fear dad has his heart in his mouth, my first thought was “Well, hospital is only a few K’s away”. He launches over the first jump getting well over a foot of air as he lands with a wobble, he continues on pedalling his little heart out the whole way and crosses the line with a 1:02.56, promptly followed by a big skid, nearly dropping his bike from exhaustion. “Did you see me? I was like up in the air! I was thinking about that song ‘I believe I can fly’”, I told him his time and he fist pumps the air as he heads up to write down his time which was barely legible due to him shaking from adrenaline. He sat down for a drink and we discussed his airtime, “I think I took off because I went much faster and the jump is on an angle like this *shows me the angle with his hands* which is like, I dunno, something degrees, and that pushed me up into the air”. Whilst he cooled down we walked around and looked at the different jumps and discussed the different angles. He has had a love of hotwheels tracks for a long time, trajectory was one of the first ways we ever managed to introduce the idea of angles several years ago. 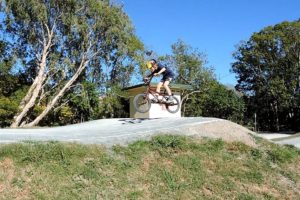 A few minutes later he sets off on his 5th lap, noticeably fatigued he records a 1:05.37. “Oh man, my legs are getting super tired, I need a rest.” 10 mins later he sets off again and records a 1:07.47, this time blaming a magpie that was some 10metres off to the side of the track. He says “this is my last lap, I am going to go SUPER fast this time”, Mr Adreneline Junkie no fear dad is preparing 000 on speed dial as he again launches over the first jump, well over a foot off the ground, he flies around the first corner before disappearing around the next. He came around the final corner onto the straight and was clearly totally spent but still managed a 1:06.37. By now he’s not even able to ride back up the ramp to record his time.

As we leave I mention that we could try and record them on a graph to compare his times each time we visit and explain the concept of a graph. He replies “Yeah maybe, but I want to learn about counting backwards from bigger numbers in Japanese as well.”

We got back to mums and spent an hour to so having an introduction to graphing whilst we discussed his times. He noted that “the numbers after the point” went higher than 59, whereas seconds and seconds and minutes “go to the next one at 59”, which was a win in itself as the concept of time has been a long term struggle for Jaiden to grasp; something we’ll expand upon when the opportunity presents itself next.

Once we’d finished graphing his lap times we sat and discussed the effects of physical exertion on the body as well as the concept of muscle fatigue, it was also decided that next time around we’d note his heart rate and also graph that to see how it rises with each run. We sat down and worked out his average lap time, but by now he was starting to disengage, so when he said “Can I go do something on my computer now?”, Naturally, the answer was yes.

The process of letting go and allowing Jaiden to self direct his learning was not an easy one, initially it came from constantly trying to force Jaiden to engage in curriculum that he had no interest in. Letting go of “where he should be” was the hardest thing of all, but now that we’re to a point where Jaiden has such a thirst for knowledge and learning, it’s all totally worth it.