There was meant to be a story to go along with this pic letting you all know we’re back on the road and announcing some exciting news as to where we’re headed next, buuut things don’t always go to plan..

Firstly, if you like the happy feel good travel stories this post probably isn’t for you. However, I know there’s a fair portion of you out there who enjoy both the ups and the downs of our “adventures”, if you’re one of the latter, read on and come join me on my rollercoaster ride!

We recently had an offer to get some pit passes for the Bathurst 6 Hour race which for the car mad Jaiden was pretty damn exciting, on top of that his hero Chaz Mostert will be there too, he’s been trying to message him for some time now on facebook and one of the things he really wanted to do was meet him this trip, so naturally we made a last minute decision to head to Bathurst!

We had some work to do to both the car and caravan so we’ve been pretty busy. I wanted to change the wheel bearings and check all the brakes just to be sure. I jack it up and put stands under it and off I get to work. Second wheel comes off and the wire to the rear brake had burned out meaning the brake was not working, great. I decide at this point to be nice to myself and get someone else to do the work. I’d met someone last year at Coochin Creek (Great Spot!) who mentioned her dad was a caravan repairer, perfect! Gave him a call and he was happy to help even shifted around other work as I’d asked for the work to be a day earlier, which was a week earlier than anybody else could do it, winning!

Given I’d relieved myself of caravan mechanical duties I jacked the van up a bit and removed the stand from under it and started lowering, the jack totally failed dropping the van right onto the levelling legs totally destroying 2 of them to the point I could not even wind them up. I call back the caravan repairer (stressed out of my mind) and he instantly assures me that he can remove the old ones no worries and replace them. Ok, crisis averted, stress levels were dropping so I moved onto the next job.. Ok, progress!

J and I head out to change the oil in the car and notice small pieces of metal in the oil, so much so Jaiden was pointing the 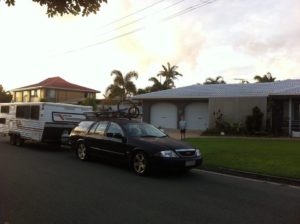 pieces out. Short version for those who know nothing about cars, that’s not a good sign, not necessarily catastrophic, but not a good sign at all. Especially with a 2500km round trip planned and the fact I only installed this engine a few months ago. Upon further investigation I discover a slight knocking sound from the engine, eek, that’s not good.. I decide we’ll just head to Bathurst and cross our fingers, I figure that worst case scenario is we end up on the side of the road somewhere broken down with the caravan, but hey at least we tried, right?!

The next day the caravan repairer arrives and we discover the legs are too long for the caravan and we need shorter ones, so I go on the hunt for more, $500, gulp. Warren from Casavilla Caravan Services QLD made a couple of calls and tracked some down for half that cost, horray! He offered to come back up Saturday morning and get it done so we can head off after lunch. He cuts off all of the old legs so he can replace all 4 the following day. His poor wife then drives to the other side of Brisbane only to find out the supplier forgot to get the front ones out of the warehouse and only had the rear ones, they could not retrieve the front ones as the sole worker on site didn’t have a forklift ticket to go and retrieve them, sigh.

He fits the 2 rear legs the next day which will at least make the caravan somewhat liveable, as having a “house” that rocks every time you move is not much fun especially with a child that likes to roll around in his bed all night. A massive thanks goes out to Warren for his awesome service, despite me being stressed out of my brain and making his life hell he did everything he possibly could to get us on the road on time safely and comfortably and for a damn fair price considering the work. If you’re in the Brisbane or Sunshine coast areas and need any work done to your caravan or trailer, he’s your man!

We finish packing up and hit the road about 5pm to try and get 100km under our belts before dark. We get to the highway and discover the overpass is closed sending us on a 18km detour in the wrong direction, straight into 10km’s of traffic which was at a standstill! By now I am over it and just want to pull up somewhere so I make a call and book us into the Beerwah Sportsground?. As we’re heading down the highway and the steering wheel starts shaking like crazy, I pull over to make sure it’s not a flat tire, nope, something has broken in the front end of the car, either steering or suspension related, awesome! We arrive safely and unhitch to head out and grab some dinner as by now I am totally over it and just want to enjoy the last few hours of what had been a stressful birthday! We were heading down the highway and suddenly there’s a massive bang under the car, instantly I think something’s either totally let go in the engine or I am about to lose steering, everything seemed ok so we soldiered on with our fingers crossed which seemed to work, as we arrived back safely. The down side, a strange ticking noise appeared from the engine bay which progressively got worse the further we drove.

By now Jaiden is both aware of the vibration and the ticking sound coming from the engine and is pretty upset, I assure him we’ll do our best to get there but in reality I was just buying time until I broke the news that we won’t be making it to Bathurst unless we can somehow diagnose the issues and get them fixed, which was this morning’s job. Whilst being pretty upset he agreed that being safe was the most important thing so today we’re hoping for a miracle and that we can both diagnose, get parts and repair the car to get us back on the road heading in the right direction.

It’s been weeks of work to get everything done in time and not only has Jaiden worked hard helping out, he’s also had to deal with me being a stressed out mess which is not much fun in itself. When we made the decision to do this we both knew it was going to be lots of hard work, so it’s a pretty hard pill to swallow that after everything odds are we won’t get there after all.

Whilst it was a different story last night, I’ve woken up in a good frame of mind and after some extended trading hours in Dad’s cuddle shop we’re both feeling like even if the worst happens, at least we tried our best. Jaiden piped up and says ‘Dad, remember if we never try, we always fail.”

Sometimes, trying your best is all you can do.

EDIT: So did we make it?! Click here to find out!