I think most of us who are parents have had those moments where you feel like, well, like a sh*t parent! Today was my day.

Jaiden has developed a huuuge interest in aerodynamics of late, which has seen him dust off his paper aeroplane book and test out different designs and work out who some fly better than others.

Yesterday arvo he came to me as I was cooking dinner and showed me his latest paper planes and told me to have a look at it. To be honest it was one of those ‘thanks for showing me, I am otherwise engaged, here’s a response you’ll be happy with, I’ll go back to cooking now’ kind of deals.. Then, he says “Have a better look under it”. I lift the wing and see the “I

Dad” written under it. INSTANTLY I feel guilty about being too engaged in what I was doing, so I thanked him, gave him a nice hug and went on cooking. He said “Maybe you can make me a ‘I

Jaiden’ plane?”. So I said I’d make him a special plane after dinner and continued on cooking.. Well, I forgot.

This morning I had told him I needed a few hours to do some ‘jobs’, so I was down in the bottom shed making a mess (More on that, tomorrow!). He came down and was throwing a paper aeroplane, he tried to get my attention to watch it, but what I was doing required my undivided attention, so I said “Just give me 10 mins”. I called him over shortly after and asked him if I 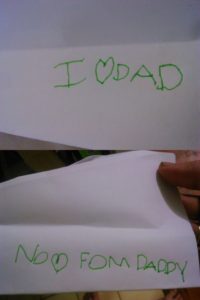 could have a turn of his plane.

His lip started to quiver, as he went to talk he started crying. I said “What’s up mate, what happened?”. He held up his paper plane and said “LOOK! No Love from daddy! You never made me a special paper plane! That’s not very nice!”

It’s so easy to get caught up in what you’re doing day to day. I think it’s always important to remember that to your kids, you’re their everything.

(8 hours later, I still don’t have the heart to point out he forgot the R in ‘From’)