Providing an education out of the classroom..

A lot of people I meet and chat to really seem struggle to grasp the concept of how you can provide an education without piles of workbooks or forced lessons because “Kids just want to play”. Then there are the people who think that this kind of home education is just the easy way out for people who are too lazy to do formal lessons and ultimately the kids exposed to this will struggle in the “real world”.

Truth is, the reason I educate Jaiden the way I do is to foster his love of learning. This can be done with his endless questions, exploring nature or just everyday life experiences… Every single day there’s a learning opportunity of some sort, to explain this further, here’s a bit of an example..

We went walking up the beach to the rock pools and on the way a section of beach was littered with Bluebottles, they were literally everywhere. Jaiden said “Dad, I am going to name this place “Bluebottle town” before grabbing a stick and writing it in the sand. After he’d finished I said “Nice work! Have a look over it and see if you can see any small mistakes”, he looked at what he’d written and grabbed a stick and instantly circled 2 L’s that he had written as a capital instead of lower case. He says “Ugh, I ALWAYS make capital letters in the wrong place” I said “Well maybe you just need to go a bit slower and think about how you’re writing each letter. Do you think there are any more mistakes there?” He said “Well, if the name is Bluebottle town, town is part of the name so maybe it needs a capital and I don’t know if bluebottle is one word or 2 words, maybe I will google it when I get back”, which he did.

Sure, Jaiden only wrote a couple of words but for a child who used to be very hesitant to write, I am happy any time he’s writing! Not only that, he was able to self correct his own work and what he didn’t know he was happy to investigate further in his own time.

Now you might be saying “Oh but that was only 5 minutes, that’s not enough learning!”, the thing is we went on to walk further and find some fresh water coming from the rock wall, upon further investigation we discovered that the rock had actually become soft, so we discussed how over thousands of years water will actually erode rock due to the mineral content of both the rock and the water. Jaiden said “Oh, that’s like how the Abercrombie caves were made by the dissolved limestone which made the caves!”
As we sat out on the rocks we tried to work out if the tide was coming in or out, Jaiden asked why the tides are so much higher at certain times of the year and during certain moon phases which then flowed onto a discussion about gravitational pull which resulted in us sitting down that afternoon and watching a documentary on gravity. 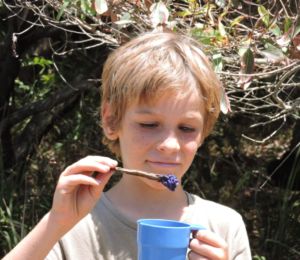 As we ventured further we took photos of different sea slugs, snails, mussels and seaweed. Jaiden said “There are so many different colors of seaweed, I wonder if I could make paint out of some! This started what has now become a several day process of collecting different flowers, seaweeds, stones and coal from the fire and researching the methods required to create a host of different paints that he’s been using to decorate the rocks surrounding the fire pit.

Despite this being a small snapshot of one day, I could use these few experiences to introduce dozens and dozens of new concepts, all similar to the kind of lessons he’d learn in a classroom. Sure, sitting him down with a bunch of textbooks would be easier and take up less of my time, but for me fostering his love of learning is the most important thing.

Many of the things we learn at school we forget over time, if he only retains his love of learning and experimenting, I think he’ll be just fine in the “real world”