Sushi and a haircut. A lesson in rudeness.

Sushi Sushi by the seashore.. Oh and we got haircuts! Surely I can’t turn Sushi or a haircut into a life lesson and a 1000 word rant, right? Wrong!

After our very successful fishing trip yesterday Jaiden was in a great mood, so after we returned home we jumped in the shower to wash off the fishy stench. I reached for the shampoo bottle and Jaidens face dropped “Do we have to wash our hair today so we can have a haircut?”, I replied “Yes mate, let’s quickly do it, get it done, get our hair cut and it’ll be all over and done with”, I got the typical “I hate washing my hair” reply.

The 3 days beforehand I’d been prepping him for both his haircut and the obligatory hair wash that proceeds it, each time 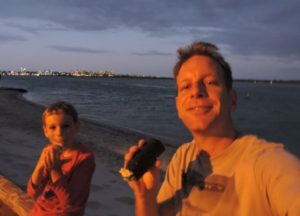 he’d do his best to talk me out of it because he still hates the process of having his hair washed and whilst he doesn’t mind having his hair cut, the process of walking into a new place and having a stranger in his personal space cutting is hair isn’t something he’s overly keen on, all pretty typical stuff for a child on the spectrum. He sure makes some great excuses, like “Dad, we are meant to be saving money, haircuts cost like, lots of money!” and “haircuts take like 2 hours, that’s like aaaages and I always get so bored” and so on. Despite hating the process of washing and having his hair cut he absolutely loves the end result. Being able to glide the brush through his hair is something he raves about and always tells me how cool he looks once it’s been cut.

I’d spotted a Barber shop along the Esplanade during our riding adventures so I figured we’d go there, it’s a small little shop below a residence. I’m all for supporting the “small guy” and often go out of my way to do just that, often at a financial disadvantage to myself. After our showers we rode down there and on the way we passed 2 other hairdressers, Jaiden asked me why we were riding past the hair dressers so I explained why and he agreed that supporting what appeared to be a smaller business was a good idea.

We arrived at the Barber and Jaiden peered through the window “It looks pretty nice in there Dad”, “Good start!” I thought to myself.. I opened the door and the barber was in the middle of the hair cut. He turned to me and abruptly said “Who wants the haircut?, I replied “Preferably both of us if possible!” to which he bluntly replied “Not a chance”, I was pretty taken back by his tone, I replied “Oh ok, no worries, busy day mate?”, he looked straight at Jaiden and said “Nope, I don’t do kids”. Somewhat dumbfounded I replied “Uh, ok, he’s really good and sits still, he won’t be a problem”, he replied “No, I don’t do kids, it’s a No.” By this stage I could almost feel my blood pressure rising, so as I turned to walk out I said “Oh well, I guess you did yourself out of 50 bucks then, so be it” and he turned to me, smiles and says “Yeah that’s fine, I don’t need the money”.

I close the door and we walk back to our bikes, Jaidens face was a picture of devastation, he looks at me and says “Why was that man so mean?! I didn’t do anything wrong! That man is an absolute bully!”, tears start running down his face and he says “THIS is why I hate haircuts and this is why I hate cities, people are so mean!” I usher him across the road and we sit on a park bench to discuss it further. With tears streaming down his face, refusing to look at me and his arms are crossed I know where this is headed, this is pretty well the classic “lead up” to a big meltdown, great.

We spent the next 20minutes talking about reasons why the man may not want to cut kids hair, none of it washed with Jaiden at all. So, I shifted the focus on us, how we treat people and how it makes those people feel. We spend a lot of time talking about being kind to people and I always lead by example, be it something simple like opening the door or letting someone merge on the road, or buying a homeless gentleman a bite to eat and sitting down and having a conversation with him. This has rubbed off on Jaiden and he’s always looking for ways to help someone out, so to see him so upset that he was spoken to and treated the way he was, could only result in one lesson.

Sometimes, through no fault of your own, people are just unnecessarily mean. However that’s a reflection on them, not on you.