Somewhere along the way “Hey Jaiden, we’re out of Sushi rice, let’s ride to the shop and grab some.” resulted in us sitting down at an Indian restaurant for dinner. I’m not entirely sure how that happened, personally I blame Jaiden’s poor directions.. **Whistles innocently**

Throughout the course of dinner Jaiden began his typical rapid fire of questions “How do you speak Indian? Why don’t 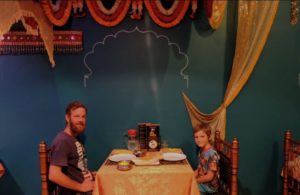 Indian people speak Japanese? Or English? It’s so weird how everybody speaks different languages”, “Is this music from India? What instruments do they use?”, “What are those things on the roof? Are they made from paper?” and so on.
The fact he got to eat his meal before it went cold is a miracle in itself… Rather than taking up the restaurant owners night asking a million questions, I asked how it is that you say “Goodbye” in Indian. Well, unbeknown to me there’s over 20 different languages in India and over 700 dialects! I was so blown away by that little titbit of information I forgot how it is you say goodbye, whoops..

We don’t eat out all that often, so being able to have an affordable and delicious meal, as well as an educational experience is certainly something I can see the value in! If you happen to be in the, go and check out India Today at Caloundra. Not only is it damn tasty and kind on the wallet, the staff are super friendly and there’s a heap of Gluten Free and Vego options, which suits us perfectly! Winning!

Since we’ve been back Jaiden has checked out India on google earth which prompted discussions about different living standards and socio-economic conditions throughout the world and he’s now checking out traditional Indian instruments and dance, which I must say is very cool indeed!

I am regularly asked questions about how unschooling works. Sometimes it’s as easy as taking the night off cooking dinner and letting their natural curiosity do the rest.. I often read about people who doubt their ability to homeschool due to their lack of knowledge; but for me the only thing I love more than sharing information with Jaiden, is researching and learning right alongside him!